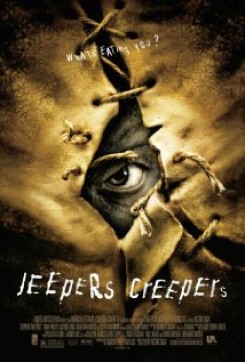 After making a horrific discovery in the basement of an old abandoned church, Trish and her brother Darry watch their simple road trip home from college turn into a race for their lives. They find themselves the chosen prey of an indestructible force that relentlessly pursues them.

There are three scenes were several black crows are sitting outside on the window sills and roof of the abandoned church. Trainers placed three live birds on their marks on the roof of the building and attached a piece of fishing line to each bird's foot to tether them for safety. Twelve fake crows were placed around the exterior of the building along with the three live ones.

In another scene, a crow sits on a pipe outside as the couple approaches and then it flies off. One handler placed the bird on its mark and another stood just off camera holding the tether attached to the bird's foot. The trainer held out his arms and on cue the bird flew to the trainer. The tether was placed around the bird's foot just in case it decided to take a longer flight, past the trainer, which it did not.

As Darry shines his flashlight down into the sewer pipe, we see a couple of rats scurry around. Two rats climb up over the side of the pipe and drop down to the grass where Trish is sitting. A trainer stood off camera and held two rats just out of frame. When the film began to roll, the trainer dropped the two rats onto the ground where foam padding was placed to cushion the fall. The rats began to run around and were retrieved when the scene was wrapped. A trainer actually got into the sewer pipe with the two rats and held them near the edge of the pipe and they climbed out and onto the grass. Another trainer was there to retrieve the rats.

In a brief scene the camera pans a room where a dog is lying on the floor and then exits the room. The trainer placed the dog on it's mark and stood off camera using hand signals to get the dog to stay and then exit the scene. The trainer retrieved the dog and rewarded it with a treat.

There is a scene where a lady is in a house and with two cats on the counter. The lady picks one cat up and holds it and we see several cats outside on her porch and running in her yard. Several trainers were involved in this scene. The trainers placed the cats on their marks and then retrieved the cats afterwards.

When Trish and Darry drive their car off the road and into a field, the car comes to a rolling stop and as it does, several birds fly out. Homing pigeons were released by a trainer from a release box as the car stood motionless and returned to a designated location.