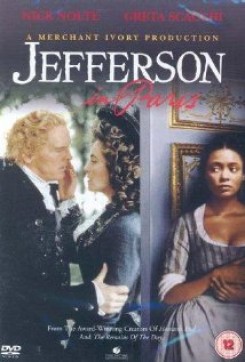 Jefferson in Paris is the story of Thomas Jefferson, telling the tale of his illegitimate Negro family of four children, Madison, Harriet, Beverly, and Eston. After the death of his wife, who died while giving birth to their youngest of three daughters, Mr. Jefferson departs to Paris with his eldest daughter. Many events take place while he resides in Paris, including his falling in love with another man's wife. One day while the two lovers are out in the countryside on a walk, Jefferson boyishly jumps over a pile of logs trying to impress his lady love and breaks his arm. This is a wound he will carry with him the rest of his life as a reminder of his foolishness. Mr. Jefferson receives word of his youngest daughter's accidental death. He promptly sends for his remaining daughter so that what is left of his family can reside together. When his daughter arrives, she brings her Negro slave, Sally, along with her. Over a short period of time Mr. Jefferson falls in love with Sally. We see just how this affects all involved.

Animal action involved mostly carriage horses as atmosphere. In one scene men on horseback are seen gathered together with a pack of hunting dogs, supposedly right after a hunt. The dogs are allowed to go over to the fresh kill and feed. This was not an actual kill, but meat purchased from a butcher and stacked in a mound.