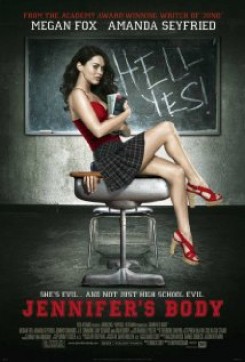 A high school cheerleader (Megan Fox) becomes possessed and begins a killing spree of her male schoolmates. Her best friend Needy (Amanda Seyfried) realizes what is happening, but no one will believe her and she struggles to help her friend.

As Jennifer seduces Jonas (Josh Emerson) in the woods, a variety of animals begin to gather nearby as the teens kiss and undress. Later a teacher discovers Jonas' corpse lying in the woods and sees a deer eating his insides. Each animal was filmed separately and accompanied by trainers while on the grounds. All grounds were checked for hazards ahead of time and the area was closed off to the public. The actors were not even present. A fake rubber body and fake entrails were used for the corpse and raspberry pie filling was smeared on them to entice the deer. A trainer brought in the deer and placed it on its mark near the fake corpse. The trainer stood just off-camera and retrieved the animal after it was allowed to lick and eat the food, which was deemed safe for consumption. This scene was also filmed with other animals such as a beaver, porcupine and skunk separately in the same manner, but only the deer ended up on the screen.

American Humane did not monitor the ferret, which is seen walking around the kitchen and eating from a dish, the horse that stands in a yard, a bird that flies up in front of a man or the rats that crawl on the floor and on a dead body.