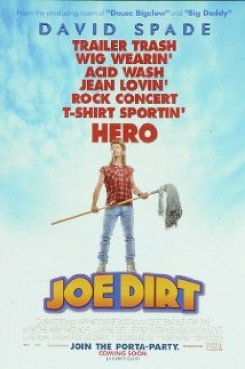 David Spade stars as Joe Dirt, a "Trailer Trash - Wig Wearin' - Acid Wash - Jean Lovin' - Rock Concert - T-Shirt Sportin' - Hero." Abandoned by his parents while on vacation at the Grand Canyon, young Joe embarks on a journey that he hopes will lead him back to his true home and family.

One cold night, Charlie the dog--played by two Lab Mixes named Ren and Luke--gets his private parts frozen to the front porch. As he whines and stretches to free himself, Joe Dirt notices the dog and comes to his aid. With a spatula and warm water in hand, Joe successfully detaches Charlie's manhood from the porch's frozen clutches and Charlie graciously thanks his hero with doggy kisses. To achieve this scene, silicone prosthetic dog testicles were tied with a harness around the dog's hind end and attached to a give-and-take cable that allowed for stretching. Trainers placed the animal on a "sit and stay" command, and also verbally cued the dog from off-camera. The snow was actually made from shredded paper and soap suds-no real chance of sticking!

Later, Charlie stands by Joe while a car drives up next to them. A man proceeds to exit the car and harshly yells at Charlie to get into the car, which Charlie doesn't do. The man then grabs the dog by its leash and pulls it into the vehicle. The trainer placed Ren on a start mark with a "sit and stay" command. From off-camera, the trainer continued to cue the dog to "sit" while the actor yelled. During rehearsals, the trainer let the yelling actor bond with the dog by giving it treats, ensuring that the animal felt comfortable with the actor. Ren was not harmed or traumatized by this scene, and, in fact, played with the actor throughout filming.

In another scene, Charlie walks with an actor beside train tracks. The actor soon gets his pants leg stuck on the tracks. As Charlie runs for help, he passes two dogs mating on the front lawn of a house. For this scene, the trainer signaled the dog to "go with" the actor along the tracks. The actor rewarded the dog with food treats. The mating was simulated. The male dog jumped onto the back of the female and "humped" it as it would a human leg. A trainer merely instructed the male dog to "get up" and cued the female to "stand and stay." Similarly, the dog that earlier "humped" young Joe's leg was cued by a trainer to "grab it." The dog was a mixed breed named Marty. Near the end of the film, a Charlie look-alike jumps into the back of a car as it drives away. The car was actually being slowly towed on a trailer. A trainer accompanied the dog for safety, and cool pads were placed on the car seats to protect the dog from the heat.

Thoughtlessly, Joe Dirt ties a bottle rocket to an unsuspecting cow's tail and watches the tail spin out of control as the fireworks explode. No real fireworks or explosives were used in this scene-computer generated effects provided the sparks and flames. A fake tail was gently attached to the rear of Pearl the cow, while her real tail was taped over to one side between her legs. The fake tail was on a c-stand and attached to a compressed air-drill to make it spin. The boy actor feigned lighting the "fireworks." Pearl was on a halter held by the animal wrangler off-camera and maintained her cool composure throughout filming.

Joe Dirt's dream girl, Brandy, is a horsewoman. In one scene, Brandy rides up on a horse and dismounts. Prior to filming, the actress took riding lessons from the horse wranglers. For the scene, a wrangler stood near the horse's start mark while another wrangler stood at the end mark. Following both the wrangler's and actress's cues, the horse trotted from point A to point B.

The dead duck that appears in the hunting sequence was a taxidermy bird. Surgical tape was applied to its neck before the young actor placed it in his mouth.

The alligator at the Gator Farm was animatronic-no real gators were used.