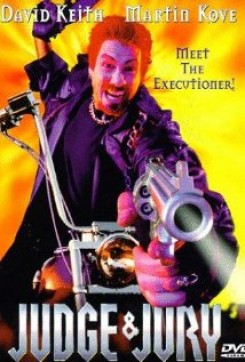 Judge And Jury is a film about Joseph Meeker, a convict on death row. When Joseph goes to the electric chair, he vows to come back and avenge his wife's death. While Joseph and Marti, his wife, were robbing a convenient store, Marti was shot by a bystander. The person responsible for killing Marti was Mike Silvano. After Joseph's death, Silvano gets the feeling that Joseph is following him, but no one will believe him. It is not until Joseph kidnaps Grace, his wife, and Alex, his son, that anyone will believe that he is really walking around. Silvano enlists the help of Mr. Lockhart, the arresting officer, and a cab driver. Joseph lets Silvano know that he is holding Grace and Alex at the local high school. Silvano, along with Lockhart and the cab driver, go to the school and after a lengthy battle with guns and explosives Silvano defeats Joseph.

The animal action consists of the use of two dogs. In one scene, the dogs are seen jumping over some brush and standing next to Joey, moments before he sends them after Silvano. Silvano is running through the woods as the dogs chase him towards an embankment. When he dives off an embankment the dogs hesitate. Joey gives them an ominous look and the dogs start down the embankment. For this scene, trainer #1 held the dogs and released them as trainer #2 cued them with verbal commands to come, with food as a reward. In another scene, the dogs are seen chasing Silvano down some stairs. One of the dogs is seen grabbing his arm and he jerks it back and forth. Then the dog is seen attacking a mannequin before both dogs run off. Trainer #1 released the dogs as trainer #2, doubling for the actor, waited at the bottom of the stairs. Trainer #2, using verbal commands cued the dog to simulate attacking him, but were actually playing. Other animal action consists of the dogs jumping up to a cab door barking at the driver and then running down a street. There was no traffic seen on the streets. The trainer placed the dogs on their mark and using verbal commands cued them to bark.