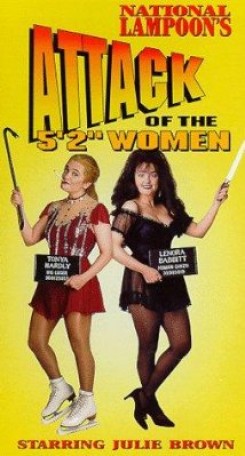 Julie Brown's Attack of the 5'2" Woman

Julie Brown's Attack of the 5'2" Woman consists of two comedy sketches that are based on the real life events surrounding two sensational news stories of 1994. One involves the figure skater, Tonya Harding, and her plot to destroy her Olympic competition, while the second sketch deals with Lorena Bobbitt, who amputated her husband's penis in a vengeful rage. Tonya Harding is renamed Tonya Hardley in the first sketch based on the Olympic figure skater's covert attack on her opponent Nancy Kerrigan, renamed Nancy Cardigan. The sketch, titled "Battle of Wounded Knee," comically depicts a tacky Tonya plotting to eliminate her classier competition by breaking Nancy's leg. Tonya plots with her boyfriend and a buddy of his to hit Nancy in the leg with a blunt object destroying her hopes of a gold medal at the Winter Olympics. Of course, as in the real life drama, the plot is uncovered, Nancy recovers and Tonya becomes the brunt of jokes, lawsuits and criminal charges. In the second sketch, "He Never Gave Me Orgasm: The Lenora Babbitt Story," Julie Brown enacts her comic version of the Lorena and John Bobbitt story. The actual story involved Lorena cutting off her husband's penis in a vengeful rage and later being aquitted of criminal charges. In the Julie Brown version, Lenora Babbitt tells her story in flashback. She has a voracious sexual appetite but can never have an orgasm. She becomes angry because her husband doesn't have the same problem. We see her attack him and put his private part into a sock puppet which she tosses out of a car window. When the police catch up with her and try to locate the puppet, she leads them to a vacant lot where they watch a poodle pick up the sock and run away with it. A detective shoots at the dog but we only hear the gun shot. In the next scene the detective is at the hospital holding the unharmed poodle in his arms waiting to have the dog X-rayed. In the X-ray we see the dog has eaten the penis and it cannot be saved to be reconnected. Lenora spies a dead biker in the hospital and his girlfriend agrees to an organ transplant. However, Lenora's hot temper cannot be controlled and she lives to strike again.

Animal action is simple in the film. The dog was prepared by his trainer to fetch the sock puppet and did so when the trainer gave him visual and verbal commands.