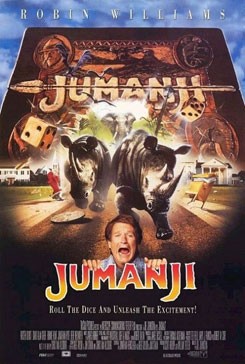 Jumanji is a mystical, magical, tale that begins in the year 1869 as two boys are in the woods on a stormy night trying to bury a chest. After the boys finish burying it, they leave, but not before they pray to God that no one ever finds the chest or disturbs the contents inside.

The story moves forward in time to the same site where the boys buried the chest but the year is 1969 a hundred years later Allen Parrish, a boy of thirteen, is again being chased by the local bullies in town. Allen is always being chased and beat up by them because he comes from a wealthy family. When Allen tries to explain to his father what is happening he receives the same answer, that he is a ""Parrish"" and must act like a man. This encounter with the bullies leaves him with a busted lip and a black eye. Further, the bullies take off with his bike. As he starts to walk home he hears strange drum sounds coming from the construction site of his father's new factory. Following the noise, he comes to a dirt wall and after digging some of the dirt away finds the old chest. He breaks the lock, and upon finding a game board inside decides to take it home for closer examination.

While examining the game he hears his mothers voice approaching, so he quickly hides the game under the couch. Later, after an argument with his father, Allen decides he would rather live somewhere else, so he packs his bags and game, but is stopped as he is leaving by Sarah, a girl he has a crush on. She is standing on his front porch with his bike. It seems she has retrieved it from the bullies. Upon hearing the drums coming from the game board, she asks about it so Allen invites her in to play with the game.

He rolls the dice and when it stops, his game piece on the board begins moving by itself. When it stops, there is a crystal type configuration in the center of the board. When he reads what is written there, strange things begin to happen to him. His skin becomes liquefied and starts to swirl into the crystal ball. Bats fly out of the fireplace. Sarah becomes frightened and runs out of the house, as the bats chase her.

Twenty-six years later a woman by the name of Nora buys the house and brings her orphaned niece, Judy, and nephew, Peter, to live there. After hearing noises coming from the attic, the children go to investigate. Judy and Peter find the game and not knowing what powers it holds, they begin to play. When Judy rolls the dice, she reads what the crystal says and insects start flying at her from everywhere. The insects fly out of the room and Peter takes his turn. This time monkeys appear. They open the door and let them go. The next time Peter rolls the dice and a lion appears along with a man dressed in strange clothes. The lion chases the two children down the winding staircase. When they can run no longer, the man again appears waving a knife at the animal. He backs the lion into a bedroom and closes the door.

Judy and Peter begin talking to the man and realize that he is the boy, Allen Parrish, that lived in their house twenty-six years earlier. Allen explains to the children that he has been living in the jungle game of Jumanji. He doesn't know that the year is 1995 not 1969. He soon finds out that his parents have died and that there is nothing left of the family business His father spent everything he had trying to find Allen.

Judy and Peter want to continue playing the game in order to stop all the madness. Allen is reluctant to play with them because he is afraid of being sent back into the game, but he does agree to watch. When the kids set up the game again, there are four pieces on the board instead of two. Allen remembers that it was Sarah's turn to play twenty-six years ago. They must find her in order to finish the game. They do and after a lot of persuasion, she goes with them.

All four of the players are now present and with the throw of the dice the real adventure begins. A big game hunter chases them, there are stampedes, monsoons, and a giant plant attack. They all survive in the end. Allen throws the dice the last time, ending the madness, and is returned to his living room where he is holding Sarah. The year is again 1969. They are children. They remember everything that happened and wonder if they will ever meet Judy and Peter again.

Twenty-six years have again gone by. The year is 1995 and Allen and Sarah Parrish, now married, are giving a Christmas party at their home. They are anxiously awaiting the arrival of the newest executive at the company and his family. When they arrive, Allen and Sarah's are shocked as there in front of them stands the executive's children, Judy and Peter. Life has come full circle.

Animal action throughout this film, except for the beginning scenes with two horses and a later scene with a dog sitting on a bed, were either computer generated or animatronic, including the fish.

In the beginning of the film when the two boys are burying the chest, they hear wolves howling in the distance. Horses are hitched to a wagon and when they hear the howling, they began looking around. The horses were merely responding to people around them changing the lighting on the set as well as the actor who was standing behind them talking. There were no wolves on the set. Later they are seen pulling the wagon down the road with the boys. One of the boys in the scene was a professional driver used as an extra to drive the wagon.

When Allen first returns from the game and realizes the year is 1995, he runs to the factory looking for his father, only to find an abandoned building with a man and his dog sitting on an old cot in what used to be the office. The dog was actually a pet of one of the crew members. The dog loved lounging on the props so the director decided to include him in the shot in the film.