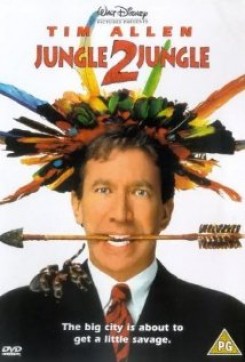 Jungle To Jungle is a film about Michael, a stock broker in New York City, who travels to Caracus to obtain a divorce from Patricia, his estranged wife. Upon arriving, Patricia informs Michael that he has a 12 year old son, Mi Mi, who has been raised as an Indian. After spending a few days with Mi Mi and learning some of the Indian customs, Michael, during an Indian ritual, inadvertently promises to take Mi Mi to New York City for a visit. While in the city, Mi Mi is constantly exploring his new surroundings and does not understand that you can not hunt the pigeons in the city, or eat the house cat, or cook and eat the tropical fish in someone's aquarium. It seems like Michael is constantly retrieving Mi Mi from one skirmish or another. However, when it comes time to send him home, Michael has formed a bond with his son that is so great, that it hurts to let him go back to Caracus.

While playing with Mi Mi's blow dart gun, Michael accidentally hits the cat with a dart, putting the animal to sleep. This scene was shot in cuts. A real, and a fake cat were used to achieve this scene. The trainer used double-sided tape to attach the dart to the cat's fur for the establishing shot of the dart on the cat. When the dart is seen flying through the air, it was a computer generated sequence. To make the cat appear as if he were falling asleep, the trainer merely picked the cat up a few inches from the sofa and gently laid him down. The cat naturally reacted by closing his eyes. A fake stuffed cat was used for all portions of the scene where the actor is attempting to wake the cat from his sleep by shaking him, dropping him on the floor, or when the cat rolls off of the table. Mi Mi sees some pigeons on Michael's neighbor's patio and decides to catch one for breakfast. While the woman is feeding the birds, Mi Mi shoots one with his bow and arrow. For this scene, real and fake pigeons were used. A rubber bird was used for the shot of the pigeon being killed. Later the bird is seen hanging from Mi Mi's loin cloth. Mi Mi hands the bird to a homeless man on the street corner. The rubber bird was used for this scene also. When Michael first arrives on the island, Patricia is supervising the delivery of piglets. A pig is seen lying on the hut floor and Patricia is stroking her stomach. Some squealing is heard and then Patricia is seen holding a wet piglet. This scene was shot in cuts. The actor was prepped prior to the scene and instructed to rub the pigs stomach throughout shooting. This calmed and soothed the pig so she was in an almost sleep-like state. The piglet that is seen was the runt of a five week old litter and the trainer applied a non toxic gel to make it appear as though he was just born. A spider is seen throughout the film. A real, a fake, and an anamatronic spider were used. For all of the scenes where the spider is seen being picked up by the actor, crawling across the floor, up a wall, up and down a pant leg, on a rock, or on the beach, or just sitting still, the real spider was used. The trainer merely placed the spider on his mark and retrieved him after completion of the shot. The boy was prepped prior to shooting and familiarized himself with the spider. The actor and spider were comfortable with each other. When the spider is seen running or is in a scene where there is more than one person present, an animatornic or fake spider was used. There is a scene where Mi Mi is staying at Richard's house, one of Michael's colleagues, and he decides to have a fish fry with the tropical fish from Richard's tank. He is seen grilling the fish over an open fire and taking a bite out of one. For this scene real and plastic fish were used. Real fish were used for the establishing shots of the fish in the tank and plastic fish were used for the shot of the fish on the spit after being cooked. When Mi Mi is seen taking a bite of one, it is actually cooked chicken. Mi Mi attempts to catch fish from the pond to replace the ones he took from Richard's tank. Mi Mi and Karen, Richard's daughter, catch the fish with their hands and toss them into a pail of water. This scene was shot in cuts. Real and plastic fish were used. When the actors are seen catching the fish, they are real, however, when they toss them into the pail they were actually plastic fish. Other animal action consists of flies and monkeys. There are several scenes involving a fly being hit by a dart. A real, rubber, and computer generated fly was used. A real fly was used only to establish the shots and was replaced by the rubber one or computer generated one for all scenes where it is actually shot with a dart. As Michael and Mi Mi are out sight-seeing, they pass by an island where some monkeys are sitting and walking across branches on a tree. The monkeys were on a tie down of sufficient length to allow them to move around on the tree branches. The tie down was attached to a harness specially made to match their body size and color. The monkeys were provided by a local entertainment trainer. American Humane was present on set in New York City to monitor the cat action. We were not on the set in Venezuela but did review all animal action scene by scene in a private screening with the producers and trainer.