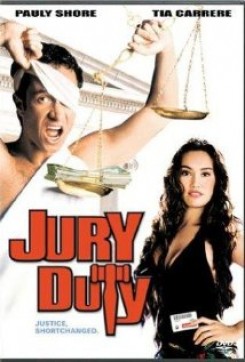 This story is about Thomas B. Collins, known as Tommy, and how he finally discovers the meaning of growing up and taking responsibility for his own actions. Tommy, in his late 20's, is still living with his mother in the Silver Trailer Park. He has no job, no money of his own, and no thought of acquiring either in the near future. He finds it just as easy to live off his mom. One day Mom drops the bomb. She informs Tommy that, though it slipped her mind, she has decided to get married and that she and her new husband will be leaving that day...and taking the trailer with them to Las Vegas. Tommy received a jury duty summons that day, but threw it in the trash. Once he realizes that he can receive free room and board if on a long trial, he digs through the dumpster until he finds his summons. He promptly goes to the courthouse and fakes prejudice on all the small trials he is interviewed for, and holds out until he is accepted as a juror in a major murder trial. What happens next is a comedy of errors. Tommy works the system for all it's worth. He does all he can to keep the jury from reaching a verdict so that he can maintain his "no cost" lifestyle that the state is providing for him while he is a juror.

Animal action is throughout in the film. Tommy has a little pet Silkie Terrier named Peanut who is his constant companion. In one scene the man accused of the murder, The Drive-Thru Killer, is poised, ready to shoot and kill Tommy. Peanut flies through the air and attacks the man's neck. This scene was shot in cuts. Peanut was filmed jumping off a small ramp with ground level camera angles. When the dog is seen flying high though the air, a fake dog was used. When the real Peanut is seen at the man's neck, he is actually licking off dog food placed on the actor's skin. In another scene, one of the jurors opens the door of her room to find a chafing dish on her door step. She takes the top off and finds Peanut inside. Peanut hops out and leads her down the hall to Tommy's room. For this scene the dog was merely placed inside the large dish for a matter of seconds and jumped out when the lid was removed by the actress. Peanut followed verbal cues from his trainer when going down the hall. Peanut is also seen eating, watching television, and sleeping. Sometimes when sleeping, he is seen with little eye shades on that match Tommy's. The shades were merely placed loosely on the dog for a short time, causing him no discomfort. Tommy also carries Peanut in his backpack. The dog had been prepped to "ride" in the backpack and was comfortable with this action. Other animal action consisted of cockroaches that are seen scurrying across a pillow in a seedy motel. The roaches were placed on the pillow by their handler and retrieved after the shot was completed. A swan is also seen swimming in a large bathtub.