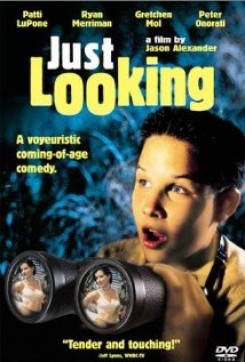 Just Looking is a film about, Jim Iris, an architect, and Mary, his wife who owns and operates a successful travel agency. They have been married for ten years and have a beautiful four year old daughter, Casey. Like many couples, after having children and being married for that long, one or both spouses start to look at themselves and their partner closer. They often wonder if the sexual attraction is still there, or has it become a routine in their everyday lives. Recently Jim has been noticing other women and the way they dress and interact with the opposite sex. While outside one night, he observes his neighbors across the alley while in their bedroom making love. Once he gets over the initial disgust of being a peeping tom, he starts to make excuses to go outside when he sees them home, hoping to catch them in the act. He even goes so far as to put a baby monitor by his neighbor's window, and hides in his daughter's tree-house with binoculars. This is just the beginning, as Jim studies how others interact with one another sexually and compares it to his own intimate relationship with Mary. The only problem with examining this part of one's life is that sometimes the other partner misunderstands the vibes one is giving. This is what happens between Jim and Mary. The big question is whether or not they learn from the experience, making their relationship more fulfilling or if it just makes them grow further apart.

When Jim is in his daughter's tree-house, watching his neighbors, a squirrel is seen running across the window ledge where the baby monitor is sitting. The squirrel nudges the bunny shaped monitor with his nose and the monitor falls into the open window. To accomplish this scene, the trainer merely placed the squirrel on the ledge and it walked from point A to B, stopping to sniff the monitor. The squirrel was rewarded with food at completion of the scene.