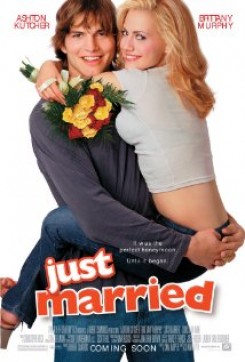 A happy young couple, Sarah and Tom (Brittany Murphy and Ashton Kutcher), marry against the wishes of Sarah's friends and family. They go to Europe for their honeymoon trying to find marital bliss. Unfortunately, Sarah's ex-boyfriend shows up, sent by her scheming parents to break up the blissful couple.

The part of Sarah's dog Bags was played by a French Bulldog named Linus. In a flashback scene of the couple's first meeting, Sarah is walking Bags on a leash along the beach as Tom and some buddies play football. A 10-week old Bulldog pup was used, to represent Bags as a puppy. The pup's real name is Iceman Cometh and this was his film debut, although prepped to walk on a leash before filming began. The trainer handed the leash to the actress right before the cameras rolled and the pup happily walked alongside her.

Bags shows his jealous side by barking as the couple kiss and caress and fall onto various pieces of furniture. Then Tom lies on the couch, but the dog continues barking at him. When Tom gets up from the couch and begins to exit, the dog, still barking at him, jumps up on the couch and takes Tom's place. A trainer placed the dog on its mark and used a combination of hand signals and verbal cues to get the dog to achieve the action. The dog was rewarded with treats afterwards.

Later, as Tom sits and reads, Bags brings him a tennis ball and shows he wants to play by tugging at Tom's pant leg. Tom gives in and tosses tennis ball. It goes out an open window and the dog jumps right out after it. The next scene is at Bags' graveside with his photo displayed. There is a flashback of this same sequence towards the end of the film as Tom tells Sarah what really happened to Bags. The room that this scene takes place in is a loft inside the apartment. The trainers put some Plexiglass near the railings to prevent the dog from falling from the loft. A trainer stood off camera and tossed a tennis ball near the desk and the dog ran to it and picked it up. To get the pant leg pull, a small pouch filled with some cooked meat was taped to the actor's ankle under his pants. The trainer put the dog on its mark and used a hand signal to get the dog to run to the actor's leg. When the dog smelled the meat and the trainer cued the dog to "tug", the dog happily obliged. The dog was given the contents of the pouch when this part of the scene was finished. A special platform was built and secured outside the open window. The platform was extra wide and padded for the dog's safety and comfort. One trainer stood on the platform to guide the dog as it jumped through the window. The trainers rehearsed this scene several times so the dog was very comfortable with the action. The hardest part of this scene was getting the tennis ball to bounce out the window!

In an Italian hotel, Tom and Sarah are in bed, kissing, when a large bug crawls on Tom's face and neck. He moves around but the bug continues crawling on him. An insect wrangler placed the cockroach on the actor and it crawled about as the actor moved around, making it appear as if he is trying to get the insect off him. The wrangler stood off camera and retrieved the insect afterwards while the crew members applauded the brave actor.

In a beautiful exterior shot of an Italian plaza, lots of birds are seen, some taking flight as Tom pretends to shoo them away. This was all photographed naturally with the birds unaware they were being filmed.