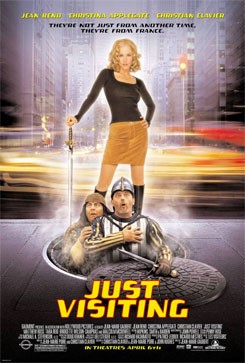 Jean Reno stars as the time traveling medieval Count Thibault, an honorable soldier flung into the 20th century to change a horrible event of the past. The fantasy/comedy/adventure that ensues also stars Christina Applegate as Julia Malfete, a very distant relative of Thibault, and Christian Clavier as his loyal and subservient slave, Andre.

A group of experienced horse wranglers and trainers spent months preparing their horses for the intense animal action in Just Visiting. Every scene-from the mild-mannered procession of horses and riders in the beginning of the film to the wildly chaotic police chase at the end-was carefully choreographed and rehearsed to ensure that no animal was in jeopardy during filming. An AHA representative on the London set confirmed that all safety measures were in place, and no animal was harmed.

Here is a breakdown of the more intense horse scenes and how they were safely accomplished:

One horse fall occurs in the film. The falling area was dug up per AHA Guidelines to soften the fall to the ground. The stuntman on horseback was placed on a mark while another stuntman was hidden in the shot holding a rope that was tied to a tree. On action, the rider drove the horse down the slope and into the pit area. When the horse and rider got to their falling mark, the rider cued the trained and experienced falling horse to go down. Simultaneously, the hidden stuntman pulled on the rope, making it appear as though the horse was tripped by the rope. Establishing shots of the horse on the ground after the fall were filmed separately from the fall scene. The wrangler gently placed the horse on the ground and cued it to lie down and stay on its mark.

In most of the horse scenes, the actors only did establishing shots with the animals while stunt people performed the action. For example, when the horses jump over the police cars, two stunt riders actually performed the scene. Special aluminum horseshoes were used for additional protection. The police officers and guards were stunt people as well, and adhered to the carefully scripted sequence to ensure that no accidents occurred. Also, the police cars that chased the horses were at a safe distance behind them-about one city block-but the result of the scene was a very fast and vigorous chase.

The Ride Goes for a Ride

Still on the run, a mounted horse enters a subway car and stands still while the car is in motion. Prior to filming, wranglers practiced with the animal getting on and off of the train. Eventually, a stunt person mounted the horse and continued rehearsing until the horse was comfortable with the action. To further protect the animal, the extras that enter the train along with the horse were stunt people and the food that the horse eats out of the potato chip bag was actually grain.

The finale of the chase scene occurs when a horse breaks through a museum window, shattering the glass. Special rubber horseshoes were placed on the animal to prevent slipping on the marble floors while 2 inch borium horseshoes prevented any penetration of the hoof. The horses were prepped several times jumping through an open window, and when the horses were comfortable with the jump, safety glass was put into place. The horses jumped through the safety glass without incident. The broken pieces on the floor were then replaced with rubber ones as an extra precautionary measure.

The dogs in the film were accompanied by their trainers, who used visual and verbal cues to get the animals to achieve their actions. The serpent, birds, and snakes were all animatronic.