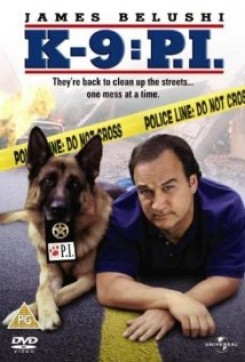 The advertisement on K-9 states "Meet the two toughest cops in town. One's just a little smarter than the other." Of course, as animal lovers, we all know who the smartest cop is. K-9 is a story about a cop named Dooley, played by Jim Belushi and his partner, a German Shepherd (Jerry Lee), who in real-life is a Sentry trained police dog. Dooley, trying to make a drug bust, goes to a shelter (K-9 Training Factory) to find the meanest dog he can. After a rocky start, the two go to a warehouse where Jerry Lee sniffs for drugs.

The dog is the star throughout the show, so to give you all the animal action would give away the whole story. The highlights are a bar room scene where Jerry Lee saves Dooley by attacking the bad guys. Not wanting the dog to know that he cares about him, Dooley nips at the dog throughout the movie, even scolds him for having gotten out of the car and gone into the bar against his instructions. There is another scene where he straps Jerry Lee in a convertible and runs him though the car wash because Jerry Lee won't allow him to use "doggie deodorant" on him. The dog has the last say though, when he tears Dooley's radio out of the car.

Dooley takes Jerry Lee home with him, only to have the dog fall in love with Dooley's live-in girlfriend and after much resistance from Dooley, the dog ends up sleeping with them. Of course there is the usual car chase scene, but this time the chase ends up on foot on a roof with the bad guys jumping from one rooftop to another. As predicted Jerry Lee sails from one roof to another in pursuit but Dooley is left hanging from the roof's edge. Eventually the bad guys are caught as Jerry Lee jumps through the window of a moving truck.

All of these scenes, of course, were done with cuts, special effects, and a fake dog here or there with the exception of the car wash scene. Jerry Lee was actually sent through the car wash, but not until the trainer and the American Humane representative had gone through first to make sure it was safe. Harsh soaps had been replaced with special soaps so the eyes and skin would not be irritated. Also the dogs had been trained to jump the seven feet between buildings. There was of course safety precautions such as mattresses off-camera about 3 feet below the dog.

In the end the dog is shot and Dooley pours out his heart to the dog in the hospital. American Humane not only was on the set of K-9 but also observed the training of the dog and his three back-ups for the roof jump scene. K-9 is a film that probably no animal lover will want to miss. Jerry Lee stands to be the canine star for 1989.