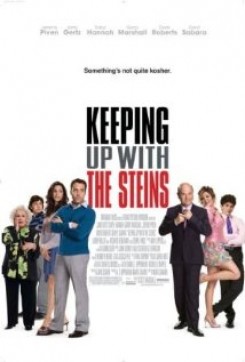 Keeping Up With The Steins

Adam and Joanne Fielder (Jeremy Piven, Jami Gertz) are determined to throw the most lavish bar mitzvah imaginable for their 13-year-old son, Benjamin (Daryl Sabara). Overwhelmed by the outrageous scope of their plans, Ben uses the event to force a reconciliation between his father and estranged grandfather, Irwin (Garry Marshall). After accepting Ben's invitation, Irwin and his girlfriend, "Sacred Feather" (Darryl Hannah), leave their Indian reservation home and head for Beverly Hills—and one heck of a family reunion.

In one scene, Ashley (Brittany Robertson) tries to lead a pony from the front porch into her house. The complete scene as originally shot featured a delivery man who brings the pony to Ashley's house. He walks the pony up the two steps and onto the porch, hands Ashley the rope, and exits. The trainer doubled as the delivery man for this scene and stood off camera watching as the actress held the rope and petted the animal.

To make it look like somewhat of a struggle to get the pony inside, the trainer attached a string to the pony's halter and held it out of frame. While the actress pulled on the lead line, the trainer kept the pony in place by holding it back by the string. Although the delivery man never made it into the theatrical release, his action with the pony may reappear on the DVD.

Two chickens sit in a cage in the background during the scene where Irwin receives his invitation. The trainer and American Humane Safety Representative inspected the cages for cleanliness and safety before placing the chickens inside.

In a brief montage sequence, a man jogs with a Jack Russell terrier mix on leash in a park. This was a cameo appearance by producer A.D. Oppenheim and his own dog.

The wolves that appear on a television show were stock footage.