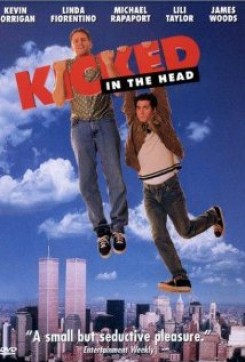 Kicked In The Head

Kicked In The Head is a film about Redmond, a 26 year old Bronx native, who recently lost his job and place of residence. All Redmond is looking for is a little peace, but his Uncle Sam, a two bit street hustler, gets him involved a drug scheme that backfires.

There is a scene where a dog is seen riding in a car with his owner. The man pulls up at a curb in front of a store and goes in, leaving the dog in the car. Uncle Sam sees the car and decides to steal it. Sam helps the dog jump out of the window before he leaves in the car. The dog, collar and leash still attached, stands by a fire hydrant and sniffs it before walking away. This scene was shot in cuts. The dog was actually wearing a harness with a leash attached. The actor helped place the dog outside the car. The trainer cued the dog with verbal and hand commands. Later the dog is walking down the sidewalk when a man, thinking that the dog's owner might be nearby, attaches the leash to a grocery cart on the sidewalk. In several scenes he is seen walking A to Be pulling the grocery cart. The dog was actually wearing a harness with the leash attached. The cart was of light weight materials. In one scene the dog is pulling the cart and starts to cross the street when a van is seen coming. The van stops and instead of hitting the dog, he hits Uncle Sam. This scene was shot in cuts. The dog and van are not in the same shot at the same time. Other animal action consists of a cat seen being picked up and carried around during a party scene.