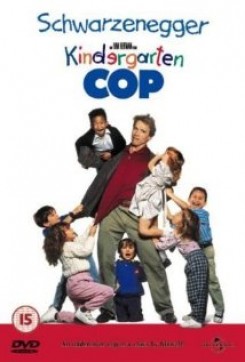 In a plan to find and capture a murdering drug dealer, detective John Kimble teams with detective Phoebe O'Hara and goes undercover as a kindergarten teacher in an elementary school. He needs to locate and identify the missing five-year-old son of the dealer in the hope of nailing the dealer. Kimble is a novice teacher and completely unprepared to deal with a classroom full of five- year-olds. In a series of hilarious learning experiences for both teacher and students, John becomes an adept and admired teacher. Along the way he finds the boy, Dominick, and falls in love with Dom's mother. A key teaching aid for Kimble is his pet ferret which he carries with him wherever he goes. The children are mesmerized by this appealing creature. "Is this a dog?" asks one. "One at a time." says Kimble as he permits the children to gently stroke his pet. When Dom's father attempts to kidnap his son from school, he sets a distracting fire. Dom rescues the ferret from the fire by placing him in his sweater. In a chase sequence in which Dom's father is holding his own son as a hostage it is the ferret who comes to the rescue by biting the father on the neck and allowing Dom to run free.

Several ferrets were used to portray the one. In the closing chase sequence a fake ferret was frequently substituted, particularly in long shots, or when the ferret was to be hidden in Dom's sweater. When the ferret "bites" the actor, he was merely going for food that was strategically placed. Other animals appearing in the film are a pony and lambs at a picnic and pigeons flying from a tall tower.