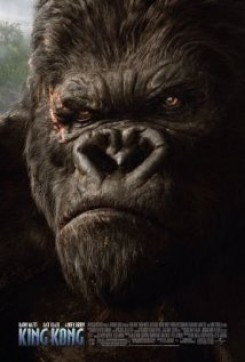 Set during the height of the Great Depression, audacious filmmaker Carl Denham (Jack Black) has lost his leading lady and must convince an unknown vaudeville actress, Ann Darrow (Naomi Watts), to star in his latest picture. Denham's devoted film crew sets sail for the mysterious Skull Island, rumored home of a colossal gorilla and other prehistoric creatures long thought extinct. Havoc ensues when the crew encounters nasty natives and all manner of creepy creatures—including the legendary giant ape who becomes smitten with the willowy blonde.

Because King Kong was an international production, Universal Pictures made arrangements for an American Humane Association Certified Animal Safety Representative to supervise the live animal actors on the set in New Zealand. These monitored scenes contained mild action involving four mounted police horses, and a horse hitched to a cart. The mounted horsemen were cut from the theatrical release of the film, but may be included in a later version to be issued on DVD.

This film met the Guidelines for the Safe Use of Animals in Filmed Media established by American Humane, received the Monitored Acceptable rating, and was awarded the "No Animals Were Harmed"® End Credit Disclaimer. American Humane applauds productions whose commitment to the humane treatment of their animal actors extends beyond our borders, and encourages other producers filming internationally to do the same.

The animals seen in the opening sequence of King Kong—an orangutan, a chimpanzee, several monkeys, an elephant, a rhino, and a tiger—were all filmed in their enclosures at the Wellington and Auckland zoos. The giant ape protagonist is a creation of elaborate computer generated imagery (CGI).

A brief glimpse of dolphins swimming with the ship was a natural occurrence in the open waters where filming occurred. The dolphins gravitated to the boat and swam alongside.