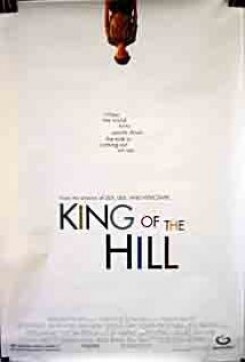 King of the Hill

King of the Hill is a warm, poignant story about people and relationships and the struggle to survive the Great Depression as seen through the eyes of twelve-year-old Aaron. It's 1933 and Aaron and his family are living in a seedy residential hotel. Finances are so bad that Aaron's kid brother Sullivan will have to be sent away to live with an uncle temporarily. During the tearful separation at the bus station, Aaron promises Sullivan he will earn enough money to get him back. Things go from bad to worse when Aaron's mother tells him she must return to the sanitarium as her tuberculosis has returned. Aaron is very close to his mother, but not his father, who is a tough man. He doesn't mean to be rough on the boy, but he just doesn't know any better. Aaron is a bright boy and top student at school, but he tells many tall tales to cover up his poverty and to be accepted by the other students. He becomes friendly with Billy, a wealthy boy who breeds and sells canaries as a hobby. Billy gives Aaron a female canary to breed with Aaron's canary, Skippy, which he does. When he brings the offspring to a pet shop to sell, he is told they are all non-singing females, for which there is no market, but the man gives Aaron fifty cents anyway. Aaron is momentarily devastated by the bad news until he sees an adorable kitten. He uses his profit to buy the kitten which he presents to Ella, a lonely girl who suffers badly from epilepsy because her mother can't afford the medication she needs. Ella is one of Aaron's many neighbors at the hotel, each with their own story. Aaron's life intermingles with their's creating a rich melodrama.

Aaron's pet canary, Skippy, enhances the atmosphere of several scenes in Aaron's apartment. When Billy brings Aaron to his home he shows him into a room that contains many cages of canaries. Caged canaries are present in several other scenes in the film. In a scene where Aaron sneaks his possessions out of the hotel, a cage with two canaries is lowered from a window. This scene was shot in cuts establishing the birds in close up in their cage. Then, just the cage was lowered to the ground by rope from the third story window. Mounted policemen are present as atmosphere in several scenes. In one scene the mounted police break up a shanty town which has grown up on a city lot. The police knock over tents as the vagrants scatter.