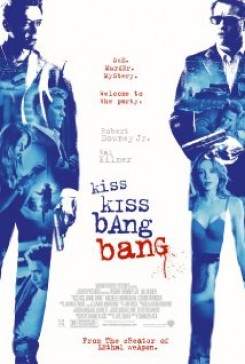 In one scene, Harry (Downey Jr.) undresses Harmony (Monaghan) while she sleeps and sees a spider crawling on her neck. He tries to shoo the spider away and it crawls inside Harmony's bra. Harry tries to get the spider out of her bra but smashes it instead. After Harmony wakes up, she discovers the dead spider inside her bra. A wrangler placed the spider on the actress's neck and let it crawl naturally. Later, a fake spider was placed inside her bra for the shot of the dead arachnid.

Harry puts his severed finger in an ice bucket on the kitchen counter and a dog jumps up, grabs the finger and runs out on the patio to eat it. The dog then walks back into the house and up to the actor, who hugs him. A trainer placed the dog on its mark and used a combination of verbal cues and hand signals to get the dog to jump up and grab the fake finger. When the dog was outside scarfing down Harry's detached digit, he actually ate a Vienna sausage. Again the trainer stood off camera using hand signals to elicit the desired action.