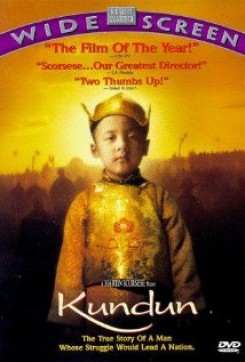 Kundun is a biographical film, based on the early life of the 14th Dalai Lama and up to the time of his flight from Tibet.

The animal action is mild with the use of horses, pack mules, deer, dogs, birds, yaks, and fish in a pond. The majority of the animals are used as background atmosphere. There is a scene where the Dalai Lama's father is given a traditional "sky burial" where the body is dismembered and fed to vultures. The vultures were given a food substance and did what came natural when being fed with other vultures present. In another scene, the Dalai Lama is fleeing Tibet and while making his way over ice covered terrain, his horse starts to slide and then rights itself. An experienced rider directed the horse across a familiar surface. In several scenes, a mouse walks out of its hole and drinks from a chalice on the Dalai Lama's altar. There is a scene where the Dalai Lama pours red sand into a pond full of coy fish. For this scene, the sand was completely filtered and contained no additives. The fish actually seemed to like the soothing motion of the slow pouring sand. In another scene, the Dalai Lama, as a small child, finds two spiders mating and gently pulls them apart, releasing them. American Humane monitored the animal action with on set supervision in Morocco provided by the Moroccan Animal Welfare Society, SPANA (Morocco/UK).