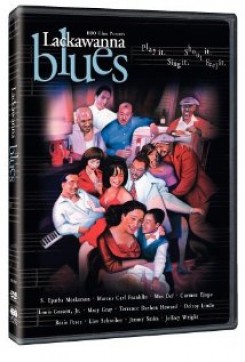 This adaptation of Ruben Santiago-Hudson's Obie-winning one-man play of the same name tells the story of Ruben's childhood at an eccentric, all-black boardinghouse in Lackawanna, New York, during the 1950s and 1960s.

A mixed-breed dog named Duke joins Ruben Jr. (Franklin) and Bill (Terrence Howard) on their fishing trip. In one shot, the dog stands on the shore with Junior. In a second shot, Duke and the boy wait by the roadside as Shakey Winfield (Barry Shabaka Henry) drives up to the rescue after Bill abandons them.

An Australian cattle dog/pit bull mix named Clifford was used for the role of Duke.

For the shore shot, the trainer placed Clifford next to Junior, who held the dog's collar until the camera rolled. The Clifford and Junior both ran out of frame. Later, Junior held Clifford on a rope leash as Shakey's car pulled up slowly. The boy and dog walked up to the car while a trainer standing by the camera used a clicker to get Clifford to look forward.

In one scene, Duke sits on the porch and growls at two visiting social workers. Afterward, when the woman is seated inside the house, the dog barks at her. Trainers prepped Clifford to speak and growl on cue. For the action on the porch, trainers set the dog in a stand-stay position, and one trainer waiting next to the camera operator cued Clifford to bark. Inside the house, Clifford was placed on mark in a sit-stay position, and his trainer stood out of frame cueing the action.

After Jesse (Henry Simmons) pulls up in a white convertible in one scene, he picks up his white Pomeranian, pets it, and sets it back down in the car. When he returns to the car, Jesse lifts the dog from the backseat and gets behind the wheel with the Pomeranian on his lap. Trainers instructed the actor how to properly handle Bandit the Pomeranian and stood nearby as they performed the scene.

An elegant older woman carries a French bull dog in her arms as she descends the interior stairs of a posh apartment building. This dog, named Harry, belongs to one of the film's producers, Shelby Stone. Trainers and Stone were nearby in case the actress needed assistance with the animal.