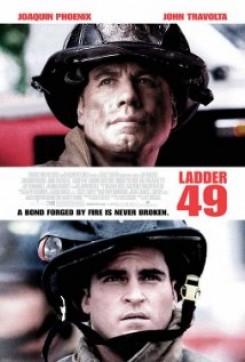 Written by award-winning screenwriter Lewis Colick, Ladder 49 follows rookie Baltimore firefighter Jack Morrison (Joaquin Phoenix) as he transitions into a seasoned veteran of the firehouse. When battling the worst blaze of his career, Jack gets trapped in a burning building. Knowing he may die, he reflects on his career, wife, and family. John Travolta plays Chief Mike Kennedy, Jack's mentor and a man who treats the firefighters of his station like a second family.

When firefighters charge up the stairs of a burning building in one scene, several rats scurry down the steps and one man appears to squash a rat underfoot. Achieving this scene required extensive preparation and a hefty dose of movie magic.

The production built a small model of the stairs and painted it for blue screen work. After inspecting the stairs, the Certified Animal Safety Representative and the trainer requested that boards be added to the sides so the rats couldn't accidentally fall from the stairs during filming.

Trainers released approximately 60 rats at the top of the stairs, and the rodents were trained to walk to a retrieval cage below. Small wooden boxes were placed on designated spots where the firemen would step, and the rats went around these obstacles as they scurried to their end mark. All this action was filmed in front of a blue screen; the actors were filmed separately and the rat footage was expertly overlaid onto this piece of film in post production. Special effect smoke was used only during takes with human actors.

Shortly after Jack joins the squad, his fellow firefighters hide a goose in his locker as a prank. When he opens the door, the goose flies out, drops to the ground, and honks at him. To achieve this scene, the crew removed the backs of the lockers so a trainer could fit inside comfortably. As the actor opened the locker door, a trainer gently tossed the bird toward him. For the goose's safety and comfort, producers placed several furniture pads on the floor to cushion its landing.

In one scene, firefighters encounter a two-year-old Rottweiler named Pete barking and jumping against a glass door. Crew members made sure the door was fixed firmly on its hinges and that the lock worked properly to keep Pete securely inside. One trainer released the dog inside the house while another stood on a ladder directly outside the door so the dog could see him. To entice Pete to play his part, the trainer held up the dog's favorite toy and Pete began to jump and bark excitedly.

During a parade scene at the end of the film, a small, costumed dog rides on what appears to be a skateboard. Producers filmed this sequence during the St. Patrick's Day Parade in New York City.

The following animal footage may not appear in the release of Ladder 49, but American Humane did monitor the action and deemed it in compliance with American Humane's Guidelines.

Since filming took place in Baltimore, the director included footage of an Arabber horse and cart walking down the street. The term Arabber is used in Baltimore to refer to ponies that pull small produce carts throughout the city. Baltimore's Arabber Preservation Society, which continues this centuries-old tradition, provided a Morgan Cross pony for the scene. The wrangler, Donald Savoy, is an actual Arabber who sells produce in the city daily. Arabbers are licensed by the City of Baltimore and adhere to strict codes for the use of animals within the city limits.