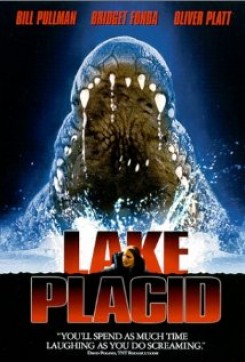 Lake Placid is the story of a giant Asian Crocodile, that migrated north to a secluded lake in Maine. After the croc terrorizes the population and snacks on some of the native livestock and wildlife, it is finally hunted down and captured. This film was shot in Canada outside of AHA's jurisdiction. Oversight for the live animal action was provided by the Vancouver, BC S.P.C.A.

Croc Wisdom: It's a bear to have a cow before a swim. Wait a while crocodile. Most of the animals in this movie were born in captivity - captured by the masters of computer generated imaging (CGI) at Digital Domain. These visual effects gurus were able to study documentary footage and work with master prop maker, Stan Winston, to create the killer crocodile, plus his giant un-happy meals, namely a bear and a cow. Live animals do appear as background extras. After studying film footage of a four-foot long crocodile and a twenty-foot crocodile chasing a human, the technicians at Digital Domain then worked with a laser scan of a model built by Winston. The animatronics were built to scale, enlarged to thirty-two feet in the computer, resculpted and manipulated by the computer to create all of the intricate articulations that make the digital animal appear real. Over three dozen articulated joints were computer generated for the crocodile alone. By filming animatronic animals that were self-contained and mechanically operated and then using computer enhancement, the filmmakers turned Lake Placid into a pretty frightening vacation spot. In one scene a cow appears to be dangling from a helicopter. According to the local humane organization on set, a live cow was actually lifted in a colic sling by a crane. In the final edit of the film the cow appears to be dangling from the helicopter.