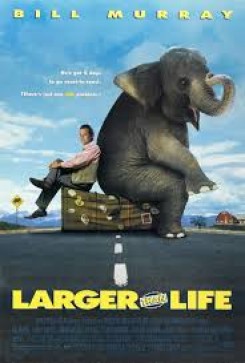 Larger Than Life is the story about Jack Corcoran, a writer/author, and Vera, an elephant, that he inherits from his deceased father. When Jack was a toddler, his mother told him that his father died before he was born. However, forty years later, at his engagement party, he receives a telegram informing him that his father died the previous month, leaving him a sizable inheritance. Jack goes to Maryland, to the offices of Trowbridge-Bowers Attorney at Law, thinking that he is the recipient of money or property, only to find that he is the new owner of an elephant, named Vera. He learns that his father was a circus clown and that Vera was part of his act. Jack not only has to find a new home for Vera, but he must pay the law firm thirty-five thousand dollars for maintenance fees. His main objective is to sell the elephant, and then pay the fees owed to the attorneys.

What Jack does not anticipate, is the feelings he develops for Vera as they travel from Maryland to California, where he must make a decision, to either sell her to Terry, a trainer in Hollywood, where she would be in the movies, or to Mo, a Zoo trainer. If he sells Vera to Mo, she will be sent to Sri Lanka, with other elephants as part of a gene-pool experiment. However, Jack must first get Vera to California which proves to be somewhat difficult, as he does not know the first thing about elephants. Their adventure first takes them from Maryland, to Kansas, to the Rocky Mountains, Mexico, Hollywood, then San Diego. During their travels they use trains, semi-trucks and a lot of walking to reach their destination. In the end, Jack makes the right decision. Vera's days of standing on her hind legs, bowing to crowds, moving objects with her trunk, and numerous other tricks are over, as she spends her final days with her elephant friends, in the rain forest of Sri-Lanka.

The animal action is throughout the film, mainly with the use of an elephant. There are a few scenes where livestock such as goats, chickens, cows, and a dog is seen in the background used for atmosphere.

Vera performs many behavioral tricks such as, standing on her hind legs, pushing objects with her trunk, carrying an actor on her back, doing hand stands, skips, bows, lying down, sitting, picking up different objects with her trunk; flowers, cell phone, etc. Two elephants were used for the film. Both elephants were prepped prior to the scenes. Three trainers, strategically placed, used verbal and hand commands to cue the elephants for the behavioral stunts.

In a scene in Maryland, Jack is running down the sidewalk with Vera in pursuit. Vera goes through a clothes line full of clothes, taking some of the items with her as she runs off. This scene was shot in cuts. For this particular scene, in addition to the three trainers, two wranglers were also present. The streets were blocked off, with security present to keep on-lookers at a safe distance. Articles of clothing were draped over the right rear of the elephants head to make it appear that she had run through someone's laundry. Again verbal commands were used to cue the elephant to her next mark.

In one scene, Jack and Vera are being driven to Hollywood in an old carnival truck by Vernon, a friend of Jack's father. Vernon's truck backfires, blowing smoke everywhere as it breaks down. As Vernon walks alongside her, Vera pushes the vehicle down the road while Jack steers. For this scene, the trainer gave a verbal command for "head down" then "push". When she is seen riding in the back of the truck, she is actually in a truck that had been loaded onto a semi and driven down the road. Trainer A was in the truck with her while trainer B was off camera, above on a cat walk. The smoke was coming from under the truck and was not directly around the elephant.

There is another scene where Jack and Vera have been traveling across the desert and they come to a lake. They are hot and dusty so Jack rides Vera into the water and they have a swim. Elephants love the water, therefore, the trainer merely used verbal commands to cue the elephant to walk in the direction of the water and she entered on her own. The elephant is seen splashing water with her trunk and doing what comes natural to her when swimming.

There are several scenes where Jack is talking to Mo or Terry on the phone and the two women are shown at their prospective compounds. Terry is seen on two occasions holding a chimp and then a jaguar with elephants and other exotic animals in the background. The trainer, merely placed the animal in the actor's arms retrieving him after the scene was complete. The other animals were placed on their mark and with the use of verbal and hand commands told to stay. In two scenes, Mo is checking an elephants eyes and giving one a shot. Other elephants are seen in the background walking in a circle, holding one anothers' tail. For the segments of the injection and the eye check, the actor was merely simulating the injection with a prop and checking her eyes. The trainers, were off camera leading the elephants in the background.

There is a scene, when Jack and Vera are on their way to Hollywood and get caught in a rain storm in Mexico. They take shelter in a nearby village. The villager's church steeple is cracking because of the flooding, so Vera stands on her hind legs and applies pressure to the crack with her front legs, stopping the water and saving the building. The scene was shot in cuts. The trainer used verbal commands to cue the elephant to stand and place her front feet on the steeple. The steeple was mounted on a hydraulic and pulleys were attached to hold the steeple in place, keeping all weight away from the elephant.

In yet another scene, Vera and Jack are traveling with Tipp a semi-truck driver. When Tipp threatens to assault Jack, Vera picks him up by the leg and dangles his body in the air. For this scene, trainer one cued the elephant while trainer's two and three were used to spot and assist. A stuntman did a shoulder stand, bearing most of the weight, so that the elephant did not withstand much weight with her trunk.

After Jack and Vera arrive in Los Angeles, they are seen in front of the Convention Center, where Jack meets Terry. While talking to Terry, exotic animals can be seen in the background and Vera meets another fellow elephant. When Terry and Jack are discussing the details of the purchase agreement for Vera, Jack sees a trainer prod Terry's elephant with what he believes to be a wand similar to his. But looking closer he sees that it is a device with a metal piece on the end and when the trainer applies it to the elephant it shocks her, making her whimper. He immediately goes to retrieve Vera and take her to Mo at the San Diego airport. For this scene, the actor merely used a prop with a soft rubber end and simulated touching the elephant with the tip. All of the other animals were placed on their mark by their trainers and told to stay.

There is a scene where Jack and Vera arrive at the San Diego airport. The two proceed to go through the terminal, passing people, and shops, while attempting to get to the cargo plane destined for Sri-Lanka. They quickly run a wand over Vera and let her through the security gate and the two travel out to the runway where they meet Mo. Vera gives Jack her trunk and he blows into it telling her good-bye. She is then seen standing in front of the entrance of the cargo plane as she starts to go aboard. We last see Vera as she makes friends with the elephant in the safety compartment next to her. Three trainers were used for the segment of Vera and Jack running through the terminal. Trainer #1 cued the elephant to run down the corridor and around the metal detector. The second trainer spotted her, while trainer #3 waited at her next mark. When Vera and Jack run onto the airport tarmac, trainer #1 merely released the elephant to trainer #2, who used verbal commands to cue her to her next mark. As Vera is lead towards the plane, she is actually being lead by her trainer, who is acting as one of Mo's zoo trainers.

There is a scene where Jack has purchased a semi-truck and is driving Vera down the road. He has never driven a semi before so his driving is somewhat erratic. The elephant is not seen being loaded or unloaded from the livestock truck. There is one shot of Vera which looks like she is in the back of the truck. This shot was filmed in the studio before a blue screen and later inserted in post-production.

When in Maryland, Jack and Vera are staying the night in the junkyard and two dogs come around a corner, barking at them. Vera, never touching the dogs, raises her trunk and the dogs run away yelping. The trainer used verbal commands to cue the dogs. In another scene in the junkyard, Vera pushes a Volkswagen onto its side to retrieve a clown nose, previously worn by Jack's father. To accomplish this, the car had pulleys attached to it and was actually held by hydraulics, giving the illusion that the elephant pushed the car onto its side. The trainer merely used verbal commands to cue the elephant to push the car with her head.

While Jack and Vera visit the local petting zoo in Maryland, a dove lands on Jack's head. The caretaker of the zoo starts throwing seed to the bird trying to get it to fly away. There are also goats and chickens seen in the yard.

Other animal action consists of a vulture seen sitting on a dead tree as Jack and Vera make their way through the desert. The trainer merely placed the vulture on the tree trunk and retrieved him after the shot. Also, when Jack and Vera are on their way to a train in Mexico, some of their Mexican friends are seen riding horses along side of them. When they are in the Mexican village there is a dog and other farm livestock seen in the background.