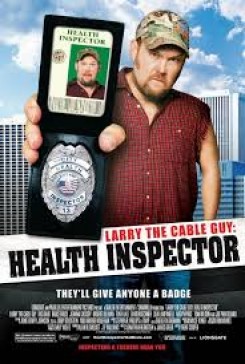 Larry the Cable Guy plays a low-brow city health inspector who is very happy with his job until a new partner is assigned to him who plays by the rules—unlike Larry. They are assigned to investigate an outbreak of mysterious food poisonings at some of the city's most elegant restaurants. This could prove to be Larry's biggest case ever, but can he handle it?

This film met the Guidelines established by American Humane, received the Monitored-Acceptable rating, and was awarded the "No Animals Were Harmed"® End Credit Disclaimer.

Larry sits at a restaurant's counter and kicks his feet, creating a hole in the wall through which lots of cockroaches scurry out and all over the restaurant. A combination of computer-generated imagery (CGI) and rubber roaches was used for this scene.

When Larry inspects a restaurant in another scene, he finds a rat, picks it up by the tail, and smells its rear end. Then he hands it to Amy (Iris Bahr), who holds the rodent as they talk. Before filming began, the actors learned how to handle the two rats that were alternated for this part. A trainer handed the rat to the actor right before the cameras rolled and retrieved it immediately afterwards.

While Larry and Mayor M.T. Gunn (Joe Pantoliano) sit on a bench near a lake in one scene, the mayor feeds some ducks. The ducks were filmed in their natural habitat by the production.

The filmmakers provided documentation for the dead fly and the deer heads that hang on the wall in Larry's office.