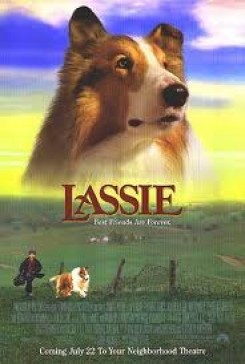 This Lassie is another chapter in the saga of the classic film animal heroine. The new adventure begins when the Turner family decides to leave the stress and danger of the big city to pursue a more wholesome quality of life on a farm. Steve Turner, a contractor, moves his second wife and his two children from his previous marriage, to the family farm where his first wife grew up. The transition is a difficult one for his teenage son, Matt, who not only misses his real mother, who died when he was very young, but prefers skateboarding and MTV to the rural backwater. His younger sister, Jennifer, is much more accepting. On the way to their new home, they rescue a collie from a highway accident. Jennifer names her "Lassie", after her favorite television character, and the dog proceeds to change their lives, helps them establish their sheep farm, rescues Matt from the jaws of a wolf, the flock from a greedy neighbor, and brings the family closer together.

Lassie appears throughout the film both in very mild action and in some exciting stunts. We first see her sitting in the cab of a truck which is transporting sheep on a rainy highway. The driver loses control and hits another vehicle. There is a shot in slow motion of the windshield of the truck shattering. However the dog was not in the truck when this was filmed. The next you see Lassie, she is in the wooded area next to the accident and watches as the driver, her master, is taken away by paramedics. Some sheep are also seen in the confusion of the accident scene, but they are merely background. No sheep were in the truck for the crash sequence. Lassie spies the Turner family, who have left their car to see the cause of the traffic jam, and although Jennifer wants to immediately adopt her, it isn't until their next stop at a restaurant, where they discover the collie has followed them, that they decide to take her along. In the milder scenes, Lassie is seen sitting in the backseat of the car with Jennifer and Matt, running through the fields of their new home, lying at Matt's bedside, reacting to family conversation, accompanying Matt in his exploration of his new surroundings, waiting for him outside of the school, and expertly herding flocks of sheep.

There are four particularly daring sequences in the film. Early in the film, Lassie helps Matt discover his mother's diary written when she was about his age. He misses her and is so moved by her words that he goes running out into the rainy night in an explosion of pent up emotion. Since he closes the door behind him, Lassie cannot easily follow. However, she runs up the stairs and does a dramatic leap out of the second story window in order to follow Matt. This scene was shot in many cuts having the dog actually make several smaller jumps which when edited appeared to be one jump from a very high window. First the dog was trained to jump from the room, over the low windowsill to a parallel platform on the other side of the window out of camera range. Other shots from the exterior perspective, where the dog is seen exiting the open window, were done by having the dog jump from and to parallel platforms only four or five feet from the ground. For the shot of the dog in which she seemingly flies through the air, the trainer had an eight foot airbag provided which was almost as high as the jump and the dog merely leaped into the waiting airbag.

Lassie follows Matt to the cave where he has taken refuge from the rain. Unfortunately, it is a cave where a wolf has also taken refuge. The wolf approaches Matt, baring his teeth and growling, about to attack. Lassie arrives and fights with the wolf, saving Matt. This sequence was shot in cuts and although the wolf and dog appear to be fighting, it was actually play fighting between a male collie and a female hybred which was half wolf and half dog. Insert shots were also done of the dogs having a real hold on one another. For these inserts, mock-up dummy dogs were used for each of the real dogs to grab hold of in turn. Growling and fierce sound effects were also added in editing to heighten the effect of the mock fight. For the close up shots of the wolf baring his teeth and growling at Matt, a trainer held the wolf in a harness while a second trainer held some meat out of camera range. For this shot a real wolf was used, however the collie was not in the area when this was shot. For the shots where Lassie appears on the rocks outside the cave and the wolf is seen within, there was a hot wire between the animals and several trainers at hand just out of camera range. At no time did these animals make contact with each other. When they get home, Matt cleans up Lassie's wounds which are really a non-toxic stage blood applied to the dog's nose.

In another series of scenes, Matt is befriended by April, a young girl who is fond of animals and quite knowledgeable about them. She appears in one school scene with a baby goat placed on the teacher's desk to present as a 4-H project. The trainer had placed the goat on the desk before the shot and it merely stood there being petted by the actress. Later in the film, when Matt and Lassie find a lamb who has been orphaned after coyotes kill its mother, April helps them nurse the lamb. Although there is a shot of the slaughtered sheep, this is actually a taxidermy animal which was also embellished with stage blood from the prop department. The baby lamb is handled gently in several scenes where it is being bottle fed. The trainer had three orphaned lambs who were used to show the baby getting stronger and larger. For the shot of the baby lying against the tree, having just lost it's mother, a very young baby was placed by the trainer on a warm hot water bottle camoflaged by leaves where it promptly fell asleep.

The family discovers that the prime grazing land in the valley is really theirs and this prompts them to go into business as sheep farmers. There are several scenes where Lassie is seen herding sheep into the pens and over the fields. The dog had been trained to do this prior to production. A very wealthy neighbor, Sam Garland, who has been using other peoples land to raise his large flocks, encourages his spiteful sons to scatter the Turner flock. The two Garland boys ride over on their three-wheelers and start to agitate the sheep. Lassie senses that something is wrong and leaps out of the Turner truck to hurry over the hills and stop the vandals. She chases the boys down on their bikes and pulls at their pant legs while they are riding. When the family arrives home, the sheep are safely herded back and it appears as if nothing has happened. The scene was shot in cuts. The truck was not in motion when Lassie jumps out of the truck bed. The bikes were driven at a very slow speed and the film was speeded up in editing to make it appear as though they were going much faster. To get Lassie to bite at the pant leg, a vitamin supplement, which she likes, was smeared onto the pant leg as a lure.

The Garlands, however, will not be stopped. In another scene, they ride over at night on horseback, cut the Turners' fence and herd the sheep to their own land. Lassie sees this and in her attempt to stop them she is kidnapped by the Garlands. The boys throw a net over her and lift her into the father's truck. Sam Garland locks Lassie in a shed where the only means of escape is a high window. After several attempts to clear the wall below the window, Lassie finally does a dramatic leap out the window and runs to alert the family of the theft. For the attempted jumps, the trainer verbally commanded the dog to ""hold"" on the window sill and then called her back. For the final successful leap, the scene was filmed in cuts. Although it appears that she is jumping from the ground and leaping out a high window, she actually jumped from a platform inside the shed, through the window, landing on another platform on the other side of the wall. Both platforms were off camera making the jump appear much bigger than it was. When Lassie is filmed from the exterior view, the window seen is actually built much lower than it appears.

Lassie gets Matt to follow her to the stolen flock and they proceed to herd the flock home. However, the Garland boys appear in the woods by the river and hold Matt at gun point. Matt fights with Josh Garland and the rifle is tossed into the river. As Josh goes to retrieve it, he is swept downstream by the current toward the rock strewn rapids. Matt swims out to save him, and while he gets Josh to a safe spot, he is swept away himself. Lassie dives in to rescue him. Matt gets hold of a fallen log but Lassie gets swept down river and over the rocky rapids. This scene was shot in cuts and one of the Lassie doubles, actually a more awkward swimmer than the main Lassie, was used so that it appears as if the swim was more difficult than it actually was. In fact, because the river was relatively calm, it was necessary to create the appearance of rapids by agitating the water around the dog with jets of water from fire hoses placed in the river. Both an animatronic dog and a mechanical dog head were used for the actual moments where the dog is seen going over the waterfall and in the parts of the river where the rapids appear dangerous.

Everyone thinks that Lassie has been killed in the river accident. She appears however, between some rocks at the river's edge. She is wet and wounded. We see Lassie making her way back to Matt, limping and holding up a bloody front paw. For this scene a ""limping boot"" with a little wooden ball was placed under the dog's pad so that when the dog walked it felt like a pebble was in its toe. Instinctively, the dog favored the foot. The dog was allowed to do only two takes at a time so that the boot would not irratate the foot in any way. This injury effect was enhanced by the use of non-toxic stage blood on the foreleg. Lassie bravely limps to meet Matt at school, they are reunited, and the film ends happily.

Many sheep are used throughout the film. They appear in the fields grazing, in a truck used to transport sheep, and are being herded either by Lassie or by wranglers on horseback. Both Sam Garland and his sons are seen riding horses and in one scene Sam is training a horse on a halter in a corral. There are also some bats that flutter around the cave where Matt and Lassie encounter the wolf."