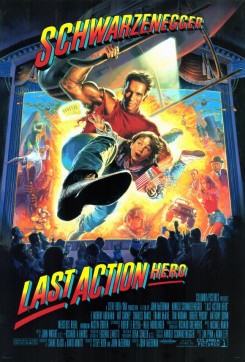 Last Action Hero is a wacky, exaggerated action film with many surprising twists that should amuse and delight action buffs and Schwarzenegger fans.

Danny Madigan, a despondent teenager, is given a ticket by one of his only friends, the owner of a movie theater which is about to be torn down. The ticket supposedly belonged to Houdini and posses magical powers. One day while watching one of his favorite action packed movies staring his hero, Jack Slater, a rough and tough cop, Danny finds himself being drawn right through the picture screen into the movie! Danny becomes Jack's partner in this mythical town. They attempt to capture a mafia murderer, Vavaldi, while trying to figure out a way to return Danny to his world.

Animal action is limited to one scene in which Danny and Jack have gone in search of Vavaldi. When they arrive at Vavaldi's door, six Rottweilers are seen standing behind the pair. Benedict, Vavaldi's assistant, answers the door, stating that the dogs are very well trained. With that, he snaps his fingers and the dogs form a pyramid, standing on top of one another. The dogs were actually standing on individual platforms that were placed to make it appear as if the dogs were standing on each other's shoulders.