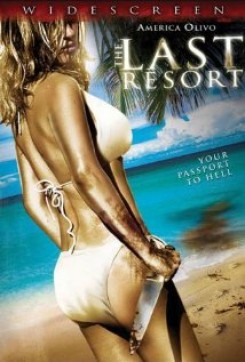 Last Resort is a film about a group of teenagers that have gotten into drugs. Their parents, as a "last resort", send them off to camp to straighten them out. The camp is situated deep in the forest of Utah. When the teens emerge from their stay at the camp, they are supposedly spiritually enlightened and have become better aware of who they are and what they want out of life.

In one scene a horse and rider are seen approaching the teens while they wait for their escort. The rider turns out to be one of their guides, Walk Far, a native American. He throws a spear into the flame and ignites a fire.

Later, the teens come across a herd of sheep crossing the road. Some area teens drive up in a fancy car and while they wait for the sheep to pass, they start to make jokes about the ""last resort teens"". In retaliation, one of the teens from the ""last resort"" group picks up a sheep and puts it in the back seat of the car. The scene was shot in cuts. A real sheep was gently placed in the car for the establishing shot.

In another scene a rabbit is seen in the woods. One of the boys attempts to catch the animal for his dinner by throwing rocks at it, never hitting the rabbit. Next he makes a makeshift rabbit trap and eventually catches it. He is seen holding the rabbit in one hand and a rock in the other, however, he can't kill it so he places it on the ground. The rabbit is seen running into the woods. This scene was shot in cuts.

Other animal action consists of Walk Far showing the boys how to hand catch a fish. A few of them are seen holding a fish in their hand. A dead fish was used for this scene. Later, Walking Far holds what is suppose to be a dead cooked snake on a stick, explaining the delicacies of the snake as a food source. A fake prop snake was used for the scene.