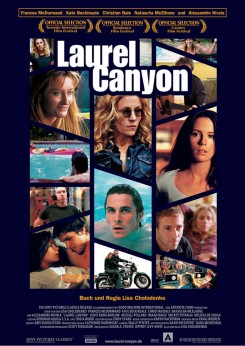 Jane (Frances McDormand) is a Los Angeles record producer, who is living with a younger rock star boyfriend (Alessandro Nivola) in the Hollywood Hills. Her conservative son (Christian Bale) returns home after graduating from Harvard Medical School accompanied by his rich fiancé, Alex (Kate Beckinsale). They move in with mom and soon discover she leads a very different lifestyle than they do. Although mother and son are initially at odds, their relationship begins to change when he discovers that his bride-to-be prefers his mother's carefree existence.

Alex goes to look at a house in one scene and is met at the door by the landlord who has a dog at his side. The dog barks at Alex as she approaches and then jumps up on her when she gets to the door. Alex pets the dog and then enters the house for a tour. The dog lies on the floor in the background as she tours the house. A trainer put the dog on its mark next to the actor and used hand signals from off camera to get the dog to bark, jump up on the actress, and lay down on the floor.