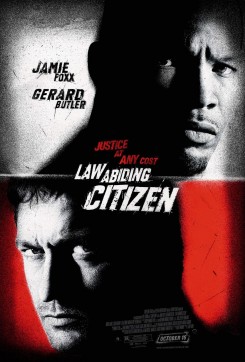 AClyde Shelton (Gerard Butler) demands justice after his wife and daughter are brutally murdered and one of the killers gets a deal from the attorney who prosecuted the case.

A delivery van pulls up at the prison and stops. The back doors are opened and two search dogs (although only one is seen) jump inside to search the van. The dogs were well-prepared for this action. An off-screen trainer cued them to jump up into the van and they anxiously sniffed around for pieces of hidden food.

Law Abiding Citizen does not carry a disclaimer at the end of the film because the production did not give American Humane a pre-release screening of the film, which is one of the requirements for issuing a disclaimer.