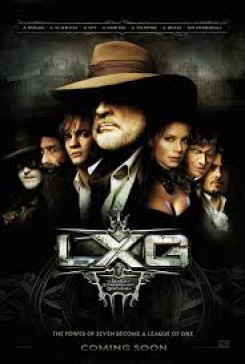 League of Extraordinary Gentlemen, The

Based on a comic book by Alan Moore, The League of Extraordinary Gentlemen features a motley team of famous characters from literature, including Tom Sawyer (Shane West) and Dracula's Mina Harker (Peta Wilson), who band together to defend the British Empire from a mysterious evil known only as The Phantom. Sean Connery stars as the team's unofficial leader, Allan Quartermain, a fading adventurer with a penchant for danger.

In a dramatic man vs. beast moment, Quartermain faces down a tiger in the snow. Other animal action is mild, and includes background animals such as horse-drawn carriages and goats.

A tiger walks in the snow towards Quartermain, who holds up his gun at the animal, ready to shoot. The tiger suddenly turns and walks away, leaving Quartermain to solemnly put down his gun. The tiger was filmed separately and his action was seamlessly integrated into the scene with the actor in post production. The white tiger, Montana, was pre-conditioned to the fake snow-covered set, which was cleared of all but 5 crew members while the animal was working. Trainers placed a white-painted chain around Montana's neck and held onto the animal at all times. Another off-camera trainer verbally cued the animal to walk and sit, rewarding him with food upon achieving the action.

Three dogs run out of a London building at night. The dogs run into the cobblestone street and around the corner. Trainers placed the dogs on their marks and called them to "come" from off camera.

In Kenya, several horse-drawn carriages line the roads while animals such as goats and cows wander in the background. Soon, an explosion rocks the village and the carriages scatter. Trainers accompanied the animals to the set and supervised the mild action. The explosion was a computer-generated effect and the animals were not exposed to any simulated explosives.

Inside the African desert lodge are numerous stuffed animals and various animal skins. These items were taxidermy and fake props purchased by the production.

Mina morphs in bats and they chase a man through the streets. This was a computer-generated effect.