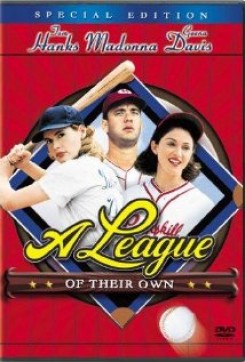 League of Their Own, A

A League of Their Own is a warm nostalgic film that portrays a time in America when all able-bodied men were overseas fighting World War II. The women at home replaced the men in the factories, on the farm, on the assembly lines, and even on the ball-playing fields.

The film opens in the present when Dotty, now a grandmother, journeys to the Cooperstown Baseball Museum for a reunion and induction into the Baseball Hall of Fame. As she arrives she's overwhelmed with memories and the scene flashes back to the early 1940's when she and her sister, Kit, earned their living working on a farm and in their off hours played on an amateur women's softball team. A scout for a women's pro team sees Dotty play and offers her seventy-five dollars a week to join the team. That's twice what she's making on the farm, so she agrees to go if they'll also hire her sister, Kit. Reluctantly, the scout assigns Kit as a pitcher.

When they arrive at the training camp they must compete with over 1,000 other women for 64 openings available on 4 teams. Along with the athletic skills they must also go through a charm and beauty course and adhere to strict rules regarding their personal behavior. The sisters finally make the team, which is managed by Jimmy Dugan, a former major league star who is 4-F because an accident has left him with a permanently injured knee and a limp. Jimmy has a severe drinking problem and has contempt for the women. He feels working with them is beneath him and that the only reason he was hired was because his name still draws a crowd to their games. He's drunk and sleeps through most of their practice and early games. However, he gradually awakens to their potential and the excitement of the women's games.

There are various sub plots involving the other women on the team, winning public interest and support for the women's team, and the inevitable confrontation in the rivalry between the two sisters. The story is wonderfully told and the performances are first rate.

Animal action is minimal. In early scenes on the farm there are free roaming geese, chickens and cows. There is a scene that takes place in a barn between the baseball scout and the two women while the women are milking the cows. As the scout leaves and walks through the yard he kicks at a chicken. The actor merely made the kicking motion and did not come close to the chicken. The action served to portray his character as a gruff guy with a get-out-of-my-way attitude. A white cat is seen briefly, primarily as atmosphere. While their bus is stopped along a country highway, a horse can be seen in a nearby field.

The production company did not notify American humane about the use of animals in their film. However, after viewing the film and because of the mildness of the animal action.