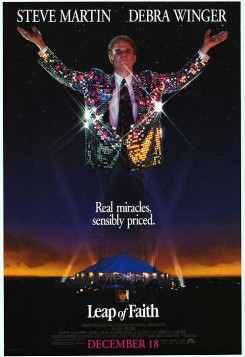 Leap of Faith tells the story of a traveling Revival Group that goes from town to town "healing" people with the laying on of hands by Jonas Nightengale, the leader of this "Holy" group.

Jonas, while driving the "Miracles and Wonders" tour bus that transports his revival group, breaks down in the small Kansas town of Rustwater. The people of this town are very discouraged and at the point of poverty due to the closing of their local factory and, now there has been no rain for their remaining crops. They are desperate people.

Jonas sees his opportunity and goes to work on these defenseless people who only have God to turn to now. Jonas is the absolute best that there is as far as a scheming con artist and he soon has almost all of the townspeople's money. We watch and wait to see if Jonas will take these poor people's money, if he will return their money, or perhaps,... will he make it rain?

In an opening scene as Jonas is driving the bus we see a turtle walking along the side of the busy highway. The turtle was placed on the ground by his handler and merely walked a few inches for this shot.

In another scene, Will, the Sheriff, brings a gift box to Jane, one of the revival group members. He opens the box, takes out a puppy and hands it to Jane. In shooting this scene, the puppy was only in the airated box a matter of a few seconds. This puppy was also seen later sitting in Jane's lap while they ride to town with Will in his truck.

In a closing scene Jane and Will are standing on the porch, when out of the flowers come quantities of butterflies flying up into the evening air. Several butterflies are seen sitting on Jane and Will's hands and shoulders. This scene was shot in cuts. Approximately 12,000 butterflies were all released simultaneously from below the flower bed by butterfly wranglers. The semi-stationary butterflies seen on the actors had been placed in an air conditioned cooling area prior to this scene so they would become more docile. The butterflies had been captured for this scene. They were all released back into their natural surroundings as soon as the scene was completed without any injury occurring. Three cows and a horse are also seen in one background scene as atmosphere.