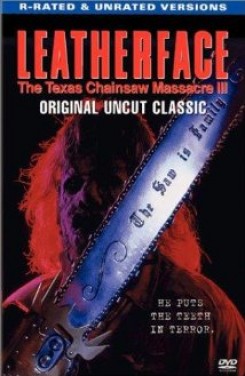 Leatherface is a mindless mix of foul language and unbridled, bloody violence. A family of sadistic cannibals patrol a lonely stretch of Texas road where they hunt their victims. The victims are then brought back to the family homestead where they are sadistically tortured before being killed and dismembered to provide meat for the table. This is not an Ozzie and Harriet household These people are totally crazy. Anyone abhorring blood, gore and violence will not want to see this picture.

In a scene where an armadillo is hit by a car, both a fake and real armadillo were used. The real armadillo was briefly sedated by a veterinarian and an American Humane representative was present at all times.

In a another scene a car smashes into a coyote, a fake fur and taxidermied coyote purchased by the prop department were used. They were smeared with stage blood and made up to look real. Dead animals on display in a gas station window are plastic.