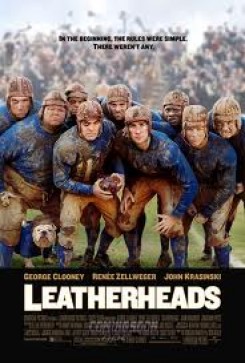 A cow grazing in a field is suddenly surrounded by several men playing football. A football bounces off the cow, which continues grazing, unaffected. For this scene, grain was placed on the cow's mark to get him to stay there. Trainers used noises, hand gestures and exaggerated body motions to get the cow to look in certain directions. The pasture was fenced and gated. The cast and crew were introduced to the cow and were instructed on its proper handling before filming began. This particular cow was accustomed to being around people and was comfortable with the mild action. The football was a soft oblong prop and was tossed gently at the cow. The cow seemed oblivious to this action.

In several scenes in the film, the team's mascot, a bulldog, sits in costume on the sidelines or near the players' bench. For these scenes, an English bulldog named Rocky was placed on his mark. For certain scenes, the team trainer held the dog by his leash. Whenever the dog was not being held, trainers used hand signals and verbal cues to get Rocky to stay. The custom-made football costume was cool and comfortable. Underneath the costume, the dog wore a cooling vest to keep him from getting too warm. The photographs of the dog with the team and with puppies were staged for the production. Trainers placed the dog and puppies on their marks and the photos were captured in a matter of minutes. For the scene in which Rocky "humps" Dodge's (Clooney) leg, the actor held a towel covered in a female dog's estrous scent (the smell given off when a dog is in heat). A trainer placed Rocky in his mounted position and encouraged the "humping" behavior.

For the scene in which a horse is seen in the background of the football field during practice, trainers placed the horse on its mark and costumed trainers stood next to it during filming. For the scene in which a mule plows in a field while the football players walk near it, the mule's owner stood behind the plow and guided it. The mule was accustomed to the owner and the action.