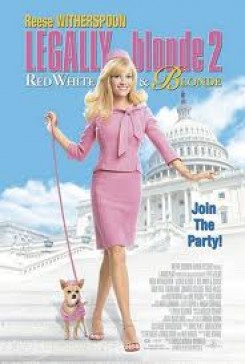 Now the pinkest lawyer ever, Harvard-educated Cosmo girl Elle Woods (Reese Witherspoon) takes on Washington when she discovers that the mother of her beloved pup, Bruiser, is being held captive in a cosmetics testing lab. Outraged by this injustice, she decides to pack up Bruiser and her designer wardrobe and heads off to D.C. to fight for animal rights. Elle takes her plight all the way to Congress, where she encounters a political hotbed of private agendas and ill-fitting tweed suits.

With his penchant for dramatic entrances still in tact, Bruiser pops his head out of Elle's bag and barks, commanding the attention of the room. Canine superstar Mooney the Chihuahua reprised his breakthrough role as Bruiser, with Gidget (known in the biz for her work as the Taco Bell pup) providing back-up support. A trainer placed Mooney inside of Elle's plush and roomy bag and cued him to pop up and bark from off camera.

Bruiser sits on Elle's lap wearing a snappy pink dress, one of the many stylish ensembles that Bruiser wears in the film. All of the canine clothes were specially fitted to Mooney and Gidget's svelte physiques – and adjusted daily based on the doggies' craft services indulgences.

Independent woofer Bruiser carries his own purse in his mouth and trots after Elle out of an elevator. A trainer placed the small purse handle in Mooney's mouth and cued him to run out of the elevator from off camera. Treats and hugs ensued.

Later, Bruiser hops out of Elle's arms at the cosmetic testing facility and races up the stairs, only to find his mother among other animals sitting in a laboratory. Saddened, Bruiser barks through the lab window at his mother, who is sitting patiently on a table. Mooney was trained to run up the stairs and through the building's hallways into the arms of a treat-wielding trainer. Trainers also brought in several different animals for the lab scene, including 3 ducks and 2 pigs named Britney and LuLu. Trainers placed the animals in their respective cages and checked on them after each take.

Incensed by the disregard for animal life, Elle proposes to her law firm that they fight to end animal testing. Not one to settle for PowerPoint banality, Elle's presentation features pictures of her beloved Bruiser to drive home her point. For the funny snapshots, Mooney sported sassy sunglasses and did his best not-guilty impression for a few mock mug shots.

Bruiser and Elle load up the convertible and head to Capitol Hill in style. Mooney was propped up on the passenger seat atop a flat platform covered in a mountain of pillows, meticulously placed for Mooney's comfort. When the car was in motion, Mooney was held in place by a trainer, who was hidden on the car's front seat floor.

For Elle's first day on Capitol Hill, Bruiser wears a matching pink pillbox hat and impresses Elle's new coworkers with his signature pop-out-of-a-designer-bag entrance. Bruiser even brown-noses with the boss, Congresswoman Rudd, played by Sally Field, by affectionately licking her nose. Mooney needed no encouragement to get kissy-faced with Ms. Field.

Out for some fresh air, Elle and Bruiser head to the park, where other dogs are also being walked on their leashes. Actors held the dogs on their leashes and walked them in the background of the scene. Later, Elle meets up with her friend Sid (Bob Newhart), who is walking a Great Dane on a leash. Again, the actor merely held onto the dog's leash as they went for a short stroll.

On another park visit, Bruiser meets Leslie, the Rottweiler of his tiny Chihuahua dreams. Les, played by Buddy, makes eye contact with Bruiser and barks while Bruiser just can't stop wagging his tail. Trainers separately cued the dogs to achieve their action from off camera.

Soon, fast friends Bruiser and Les hang out together at the park and affectionately play with each other. Bruiser hops over Les's back as the large dog contentedly lies on the grass. Mooney and Buddy practiced this move for many weeks prior to filming, and were handsomely rewarded with treats for their success.

Elle calls upon her Delta Nu sorority sisters to assist in forming the Million Dog March on Washington, in which hordes of politically-minded pups and their guardians flock to the capitol to protest animal testing. Trainers brought in 50 trained dogs for the scene while it was "take your dog to work day" with the background actors bringing in approximately 108 private-owned canines for the festivities. The actors accompanied their pets throughout filming, and production provided plenty of shade, food, and water on set for all of the canine stars to gracefully share. Even Reese Witherspoon's own family pup, suave and handsome Bulldog Frank Sinatra, accompanied his movie star mom to the set and mugged for the camera in a fashionable ensemble befitting of a doggy diva. Production also invited many animal welfare groups to participate in the Million Dog March. American Humane was among the supporters, along with Best Friends Animal Sanctuary, Last Chance for Animals, and Guide Dogs for the Blind, among others.

In a touching moment, Bruiser is finally reunited with his biological mother, who had been held captive in the cosmetics testing facility. They sweetly lick each other and frolic on the grass. Gidget provided an emotional performance as Bruiser's mom, and since Mooney and Gidget were true friends in real life, they had no trouble showing their affection for the camera.

Finally, Bruiser and Les make their love official by exchanging vows of marriage. The blushing groom and groom were cued to walk down an aisle strewn with flower petals. The newlyweds commemorate the occasion by taking their first ride as a couple in Elle's vespa scooter. Trainers placed the dogs inside the vehicle compartment and secured them with waist ties. The actors provided extra protection by holding them as they slowly drove off into the sunset.