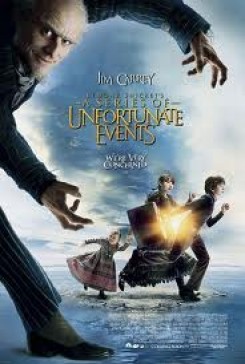 Violet, Klaus, and Sunny Baudelaire are three intelligent young children who receive terrible news that their parents died in a fire and left them an enormous fortune not to be used until the eldest child is of age. When they are sent to live with Count Olaf, a greedy distant relative, they soon learn he is trying to steal their fortune for himself.

In one scene, a duck waddles onto the deck of a boat and lies down as Aunt Josephine's house explodes in the background. The kitchen stove lands in the water near the duck, which flies up in the air and squawks, "AFLAC." This animal action was filmed in separate shots. A trainer tied a monofilament line around one of the duck's feet before filming began and lay out of sight after placing the bird on mark. Another trainer stood off camera in the water and used a buzzer to call the duck. As the bird approached its end mark, the trainer gave the line a gentle tug to cue the duck to lie down. American Humane was unable to monitor the second part of this action sequence; according to production, the shot of the stove falling near the duck was filmed in front of a green screen.

Many scenes in the film take place in this room. Trainers situated various reptiles inside or on top of cages, or on branches. Rubber snakes were placed in the back of the room among the real ones to make them appear even more numerous. All the actors, young and old, were instructed on the handling of the reptiles before filming began. Actors who directly handled the snakes did so under the supervision of an off-screen trainer.

Both an animatronic snake and computer-generated imagery (CGI) were used for the shot in which a deadly viper snake bites Monty. In one scene, a fake snake appears with a CGI message written on it. An animatronic was also used for the scene where a snake escapes from a cage and scares a baby.

To create the scenes where snakes appear to crawl on the floor, a trainer placed one snake on the ground and let it crawl around while the cameraman filmed the action. Each snake was filmed separately and inserted into the film during post-production.

A few scenes in the film feature a large African land tortoise named Tank. The camera operator filmed Tank as he naturally wandered around the set after being placed on mark by the trainer. In one scene, a young boy sits in a chair reading a large book attached to Tank's shell with non-toxic adhesive tape. As the child reads, the tortoise (and book!) slowly begins to walk toward an off-screen trainer using fruit to entice the animal's movement.

In one brief scene, a wolf runs across the street. Three wolf hybrids were on call for this part. One trainer put the wolf on its mark and cued the animal to run to an awaiting trainer, who retrieved it with a catch rope.

A rat runs through a doggie door in one scene. To set up this action, the trainer placed a bowl of food next to the camera on the outside of the door. A crew member rigged the door to stand partially open so the rat could easily push through it. The rat was placed on its mark, and because the rodent knew its food waited on the other side of the door, it automatically scurried to get to the reward. An awaiting trainer retrieved the rat.

Production built a boat dock set where animals are sometimes seen in the background throughout the film. Animal wranglers placed a pelican on some rocks, and positioned goats and chickens nearby. Food was scattered throughout the area to keep the critters occupied, and trainers stood nearby to retrieve the animals afterward.