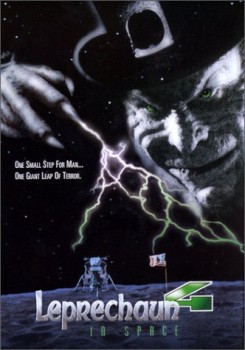 Leprechaun 4 In Space is the continuing saga about the evil leprechaun who wants to be the richest man alive and rule the world. This saga takes place in the 21st century with the leprechaun in space.

Animal action consists of the use of a tarantula, spider, and a preserved scorpion. In a scene in the laboratory, there is a tarantula in a glass jar and the doctor's assistant has a stick and it appears that he gently pokes the tarantula to move. A spider is also seen crawling out of a bowl. There is also a preserved scorpion as a lab specimen in a jar. The trainer placed the insects on their mark and retrieved them at completion of the shot. In another scene the leprechaun takes the preserved scorpion and tarantula and supposedly drops them into a blender with DNA in order to make a serum that will change the doctor into a hideous monster. Fake insects were used for this scene. All of the fake or preserved insects were purchased by the prop department.