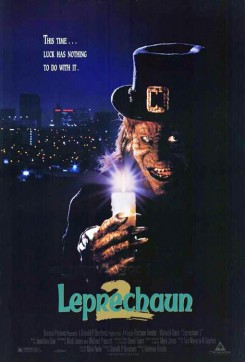 Leprechaun II is a horror story about a vicious leprechaun who leaves people maimed and murdered along the way as he tries to claim his bride against her will. The film opens 1,000 years before the rest of the story, which is set in the present time. The goulish leprechaun schemes to take the daughter of his slave to be his bride. He casts a spell that can only be broken by the young maiden's father upon forfeit of his life. In an act of sacrifice the girl's father breaks the spell. The Leprechaun vows to take the man's fairest offspring as his bride (slave) on his next thousandth birthday. Sixteen-year-old Bridget, a descendant of the maiden in the film's opening sequence, is relentlessly pursued by the leprechaun who abducts her and whisks her away to his secret lair. Bridget's boyfriend, Cody, a young con-man tries to outwit the leprechaun and rescue Bridget with help from his boss, Morty. In due course, the leprechaun murders Morty, as well as various other luckless individuals, but, in the end, Cody saves Bridget, killing the leprechaun with a wrought iron spear.

Animal action included a scene where a guard dog bears his teeth. A character extends his hand for the dog to sniff and the dog calms down, then exits through a dog door built into the front door of the office. Another scene has the same guard dog coming around the corner snarling. Cody calms the dog with some meat sticks. To get these actions the trainer had merely given the dog verbal and visual hand cues during filming. Also included is a shot of Cody in the leprechaun's lair with a half dozen insects crawling on his hair. The insects had been merely placed on the actor's hair by the insect wrangler.