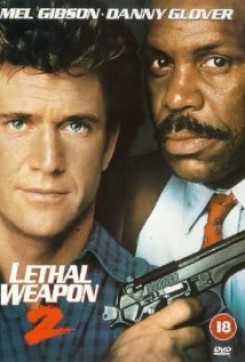 The action begins with one of the most spectacular car chases ever devised. The same cop team that paired in the original film are partners again. One is a conservative family man and the other an off-beat single who lives with his dog in a trailer and is still bitter over the murder of his wife three years earlier. Despite their differences they maintain a loyal friendship. The team is assigned to protect the star witness in a federal drug case. There are some amusing moments as the pair baby-sit this pesty little accountant who laundered 1/2 billion dollars in drug money. Things get serious after a confrontation with the drug czar who cannot be prosecuted because he has diplomatic immunity. There is romance, suspense, and an exciting escape before the villains get their due in the spectacular and violent ending.

In one scene Producer/Director Richard Donner cleverly imparts a subtle message to save dolphins. Fake fish are used when a fish tank is shattered.