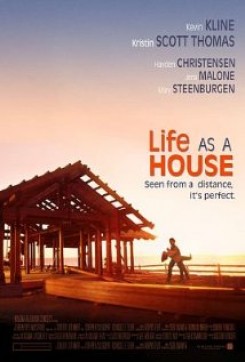 Life as a House

When George learns that his health is failing, he begins working on his life-long dream of building a house. He enlists the help of his estranged son and his ex-wife. The construction of the perfect house becomes a metaphor for the reparation of a broken life, as suggested by the title.

Guster Has Gusto! The part of George's dog, Guster, was played by a yellow lab mix named JJ. Two trainers and a vet were on the set at all times. The dog was introduced to the actors and the location before filming began, which enabled the dog to work comfortably throughout filming. JJ brought his own toys to the set so when a scene called for the dog to be playing with a toy, he was happy to oblige - a true "method acting" canine. In many scenes, Guster is sitting, laying down, playing, or just hanging out. One trainer would put the dog on its mark and, using a combination of hand signals and verbal cues, would prompt the dog to achieve the action needed for the scene. When the dog was required to lick an actor, the trainer would put some baby food on the area to be licked. JJ liked those scenes so much he had a hard time stopping when the director yelled, "cut." Guster And The Neighbor One of the running gags in the film is that Guster loves to urinate on the neighbor's car. The first time Guster lifts his leg to do the deed, the neighbor hops in his car and chases the dog through a flower bed. The dog runs to George, who puts him in the house. A trainer released the dog and cued it to run to the car and lift his leg. A tube was loosely attached to the dog's leg and wat er was released on cue. The moving car was added later in post- production-it wasn't actually chasing the dog. In a later scene, the dog grabs the neighbor's hose and they fight over it until Guster lets go. In retaliation, he runs over to the car and lifts his leg again. The trainer released the dog and used hand signals to get the dog to grab onto the hose. The dog thought this was a fun game! Towards the end of the film, Guster goes to the neighbor's yard and urinates on the newspaper. The dog begins to run away and the neighbor throws the paper at the fleeing dog. The trainer released the dog and cued it to run to the paper and lift its leg. Again the water came out of the tube on cue and the dog merely ran back to the trainer while the neighbor gently lobbed the paper in the direction the dog was running.