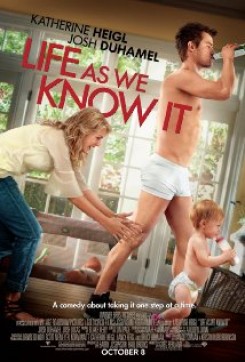 Life as We Know It

“No Animals Were Harmed”®Holly (Katherine Heigl) and Eric (Josh Duhamel) are thrown into a relationship together when mutual friends die and they become caregivers for their young child.

Two dogs are walked on leashes at a block party in the neighborhood. All grounds were checked ahead of time for hazards and the street was closed to traffic. Trainers leashed the dogs and handed them to the actors right before filming. The actors were instructed on the handling of the dogs and introduced to them before filming began.