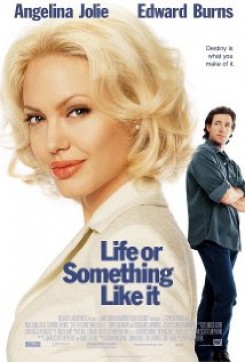 Angelina Jolie plays a reporter, Lanie Kerrigan, who interviews a psychic homeless man for a fluff piece about a football game's score. Instead, he tells her that her life has no meaning, and is going to end in just a few days. Although she doesn’t want to believe him, she decides to change her life just in case he is right.

The film opens with Lanie reporting on a story at the zoo. A woman is holding a chimp as Lanie speaks and the chimp begins to hit Lanie in the head and then covers her mouth. The scene was filmed at the Stanley Park Zoo in Seattle, Washington. The woman holding the chimp was one of the trainers who accompanied the 5 year old chimp, Louie, to the set. Louie was cued verbally by the trainer to touch the actress as she stood next to them and spoke. There are three other chimps in the habitat behind Lanie. Another trainer stood inside the habitat with the other chimps, who played happily in the background. Horse Action As Lanie reports on a protest in one scene, several mounted policeman are present. The mounted policeman watched as the crowd sings a song and dances. Seattle mounted policeman were used for this scene. The horses are used to being in crowds and following directions from their riders. Dog Action As Lanie and another character walk along the water, they pass a man walking a dog on a leash. The trainer doubled as the actor in this scene.