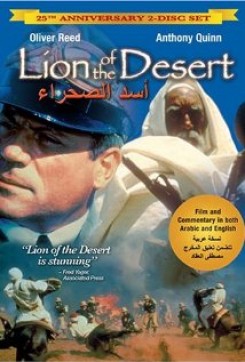 Lion of The Desert

In the Fascist Italy Pre-World War II of Benito Mussolini, the cruel General Rodolfo Graziani is directly assigned by Il Dulce to fight in the colonial war in Libya to vanquish the Arab nation. However, his troops are frequently defeated by the national leader Omar Mukhtar and his army of Bedouins. But the Butcher of Ethiopia and Libya uses a dirty war against the natives, slaughtering children, women and aged people, to subdue Mukhtar.

Horses were wire-tripped during the production of this Libyan-British film, an act that AHA deems Unacceptable. Since AHA did not receive its oversight authority of animals in film until 1980 and the fact that Lion of the Desert was made in a foreign location, an AHA representative was not present during filming. The ongoing expansion of the AHA Guidelines for the Safe Use of Animals in Filmed Media has raised the standard of care for animal actors worldwide. In addition, technological advancements have created safe alternatives to risky action, enabling filmmakers to maintain their creative vision without compromising the welfare of animal actors. AHA continues to be a vigilant watchdog for animals in film and television and acknowledges the groundbreaking history of this program while expanding and refining procedures to reflect increased knowledge and new challenges.