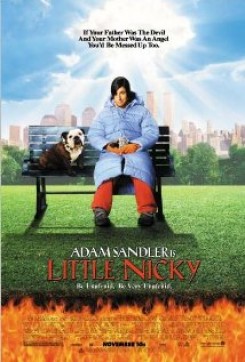 Adam Sandler plays Nicky, the youngest of the devil’s three sons. Unlike his rowdy, rebellious brothers, Adrian and Cassius, Nicky contentedly spends his days in his room making music tapes. But his world unravels when his brothers escape to earth and plot to take over Hell. Nicky is ordered to go to earth, capture his brothers, and return them to Hell before they do too much damage. Beefy, a Bulldog, agrees to chaperone Nicky through the dangerous streets of New York City.

Beefy’s ActionThree Bulldogs--Roo, Harvey, and Harley--shared the role of Beefy. Roo is three years old and lives with Steve Beren, the professional dog trainer for the movie. Harvey is seven and Harley is two, and is the youngest and the only female. Each offered individual talents that combine to create Beefy, the devil’s canine colleague. In fact, the Bulldog breed was chosen for the role because the part required the dog’s mouth to be open a lot to simulate speaking, and the typical Bulldog pants more than many other breeds.The pudgiest of the trio, Roo, was unable to lift his leg to urinate on a doormat in one scene, but by the end of the film had lost seven pounds. Not only did he perform in that scene, but he was also able to leap onto a two-foot tall table and out onto a fire escape in another sequence.At one point in the film, Beefy humps a female dog on the sidewalk. The trainer placed Lucky, a Cocker Spaniel, on her mark and cued her to stay. The bulldog was cued to put its paws on Lucky’s behind and simulate a humping motion.As Nicky prepares to fight his brother in Hell, Beefy and several others are suspended in harnesses above the dueling siblings. The trainer secured the dog in a safety harness and stood just off camera. The scene took less than ten minutes to film and the dog didn’t seem to mind a bit.Later, Beefy lays on the couch smoking a joint with Nicky and some of his friends. Beefy appears to be high and falls on the couch and goes to sleep. The actors actually smoked an herbal cigarette and the trainer stood off camera signaling Beefy to move around on the couch.There are several close-up shots of that adorable Bulldog face reacting to something or looking in a certain direction. To achieve these shots, the trainer got the dog’s attention with its favorite squeaky toys, as well as with hand signals and verbal cues.Other Animal ActionIn a few scenes in Hell, rabbits crawl on the ground as the demons walk and bend down to pet and hold them. A total of thirty-five rabbits were used, with five trainers to supervise. Several puppy pens were set up as safety barriers to keep the rabbits confined on the set. The trainers put rabbit pellets down to entice the rabbits to stay on the set. Also, the butterflies and the bees were computer generated.

An Interesting NoteAll during the shoot, Adam Sandler spoke with the trainer, Steve Beren, about adopting a Bulldog puppy. A few weeks before the film was finished, Steve located a litter of pups related to his dog, Roo. Adam adopted a pup from the litter and immediately named him Meatball.