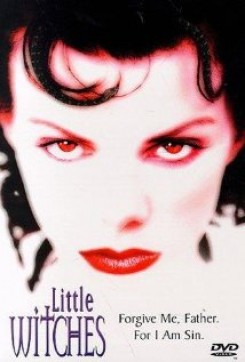 Little Witches is a horror film about a group of teenage girls on Easter break at Santa Carlita Academy, an all girl's school. During the school break, construction is being done on the old building and a hidden room is discovered with dead bodies in it. The rumor is these bodies were the six girls from the ancient poetry society who were killed at the school over a hundred years ago while practicing devil worship. Jaime and her friends decide to have a seance to talk to the dead girls spirits and find out their secrets. They conjure up the dark force, "He Who Comes", but Faith, another student, and Sherilyn, the Guardian chosen to stop the unholy beast, stop the evil and send it back where it came.

There is a scene where a crow crashes through a window and another scene where the crow is seen lying on a dinner plate. For these scenes a dead crow was purchased from a studio prop rental company. Other animal action consist of some seagulls seen standing on some rocks and flying in the sky. There is also a scene where an actor is supposedly gutting a dead fish. American Humane was informed that all live animals had been edited from the script. The production company provided receipts for all fake or dead animals used in the film.