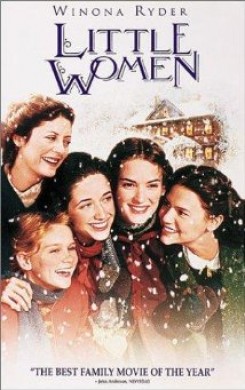 Little Women is a remake of the classic film based on the coming of age tale by Louisa May Alcott, about the March sisters, Jo, Meg, Beth and Amy. The setting is Concord, Massachusetts in the year 1863 when the Civil War is raging down south, Christmas is on the horizon and their father is away fighting along the banks of the Potomac. Each girl has a unique personality and, as the tale unfolds, we see how their strengths and weaknesses benefit all of them and help them grow in love and courage. Told through the eyes of Jo, the oldest sister who longs to become a writer, the story reveals the trials and tribulations of being raised a woman at that time. With the guidance of their mother, Marmi, and their Auntie March, they have strong role models. They also befriend a neighbor, Lorry, a rich boy who has come to live with his grandfather. Lorry's love for Jo brings him close to the family and time teaches them lessons about love and friendship. After a telegram arrives with the news that Mr. March has been wounded, Marmi leaves for Washington to nurse him, escorted by Lorry's tutor, Mr. Brooks. Jo is left in charge and not only sacrifices her beautiful long hair to help pay for the trip, but shoulders the burden of the family in Marmi's absence. When Beth contracts scarlet fever, Jo nurses her, sending little Amy to live with Auntie March. Eventually, once Marmi and Mr. March return home, Meg marries Mr. Brooks, Beth recuperates, Amy travels to Europe with Auntie March and Jo gets her wish, leaving for New York City to become a writer. While in New York, she meets and falls in love with Frederick, who encourages her to write about what she knows. In time, Jo receives a telegram urgently beckoning her home. Meg is pregnant, Beth succumbs to her weak constitution and dies peacefully and Amy comes home, having married Lorry. Auntie March also dies and leaves her estate to Jo who decides to turn it into a school. Finally, taking Frederick's advice, she begins the book that will ultimately become the classic story of Little Women.

Animal action is very mild in this film consisting of several scenes in which horses are seen pulling carriages as background atmosphere. In several other scenes, the March girls are seen holding and stroking their cat and kittens. There is one scene where the cat is dressed up to be a player in one of the little theatricals that Jo writes for her and her sisters. Auntie March has a pet dog of whom she is very fond and he is seen in several scenes being pampered by the old woman.