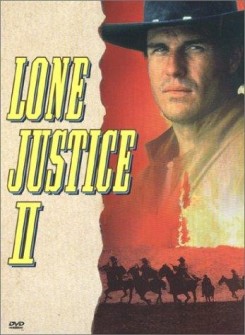 Lone Justice II, is the continuing saga of Ned Blesssing's life as told by himself from a jail cell, before his hanging. In this chapter he is returning to Plum Creek to see his father after six long years of separation. Upon arriving he finds that the town has changed drastically. His father, who had left some four years earlier to search for him, was hoping to bring Ned back to help save the town from the Borger family and bring law and order to their lives once again.

Ned comes across a black couple, Effie and Sealy, and a white man, Sticks, plowing a field as he rides his horse towards Plum Creek. He mistakenly believes that Sticks is using slave labor. Ned becomes angry and gallops across the field towards the farm. He jumps the fence, coming to a screeching halt, as Effie pulls a gun on him, demanding to know what he wants. After explaining what he thought was going on, Ned and Effie finally come to an understanding. Ned asks why they were plowing their field without a mule, only to hear that someone from town shot the mule the day before and it is unable to work.

He brings his friend, Crecencio, a healer of sorts, to help tend to the mule as he rides off to town in search of another mule for the couple. Crecencio successfully removes the bullet so now all they can do is wait to see if the animal gets better.

Upon arriving in town Ned goes to the local saloon where he encounters Verlon Borger and his sons. After a few choice words, a brawl starts between the five of them. He out smarts the Borgers, ties them up on their horses, and takes them to Effie's farm to make them plow the field. Everyone in town comes out to watch. This enrages Verlon and he threatens everyone there.

Verlon has been humiliated by Ned so he devises a plan of getting rid of Ned and the blacks. He tells his boys, Liola, and Rowby, to go to town and kidnap Ren, the town whore, and bring her out to their cabin. When word gets to Ned, he immediately rides off with Sticks to rescue her, leaving behind, Crencencio, to stay with the sick mule and the couple.

When he gets to Verlon's cabin he is ambushed and taken prisoner along with Sticks and Ren. Verlon ties them up and then leaves with his sons to finish off Sealey and Effie at the farm. However, before leaving Rowby, the youngest son, loosens Sticks ropes so he can get free to help the others. Stick takes Ren and rides back to town as Ned rides on to the farm in an attempt to stop Verlon.

It seems that both of Verlon's boys are starting to question his methods. Verlon tells them to go down to the farm and tell Effie that if they leave now he won't kill them. Liola and Rowby ride off toward the farm thinking Verlon means what he said, however, he is already on his way to ambush everyone including his sons.

Verlon shoots his son, Liola, from the side of the barn as he is talking to Crecencio and the black couple. Crecencio and the rest run inside the barn as they carry the bleeding Liola with them. Verlon decides to burn them alive and while he is lighting the debris around the outside of the barn Ned comes riding down the hillside. Ned, unaware that Verlon is at the back of the barn, hears the screams from inside but he can't get to them because Verlon appears between him and the barn. Ned hears a shot from behind, and as he turns he sees Ren across the field holding a rifle. She covers Ned as he runs to the barn, opening the door as everyone comes running out of the flames. Verlon comes around the side of the barn with a gun pointed at Ned. Stick saves the day as he sneaks up behind Verlon, gun in hand, and takes his weapon. Verlon, who is not one to go in willingly, runs through the barn screaming as timbers start to fall. He is never to be seen again.

The towns people ask Ned to stay and become their sheriff since Verlon killed the previous one. Ned decides to take them up on their offer while he waits for his father to return. Thus, begins this part of his life as the Sheriff of Plum Creek.

When Verlon leaves Ned, Sticks and Ren tied up, he also leaves behind a snake. The snake crawls up Ned's body as he lies on the floor. Stick frees himself, but is afraid to grab the snake so Ned tells him to sing to it. This allows Ned to free himself and grab the snake, by the back of its head. The scene was filmed in cuts. The camera shows the snake crawling up the lower body of Ned, then cuts to the actor's face as he watches the snake. When Ned grabs the snake's head from behind, you see the snake. Then it cuts away to the actor and back again to the snake as Ned has his head in his hand.

When Crecensio takes the bullet out of the mule, it is lying on the barn floor with his feet tied. The mule was cued by his trainer to do a lay down. The loosely fitting rope was used to insure the safety of both the mule and the actor.

The American Humane Association was represented on set by the Humane Society of Austin and Travis County, Texas.