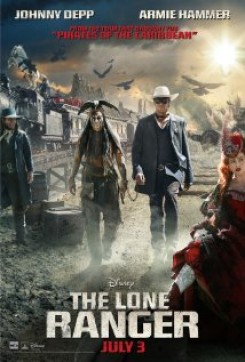 The might warrior Tonto recounts his time with John Reid, who transforms himself into the legendary Lone Ranger

In the scene where the villains ride on horseback along the moving train and a couple of them dismount and jump on the train, production achieved this action after a lot of careful preparation. Wranglers were given a start mark next to the train tracks. The train was backed up along the tracks, away from the horses, in order to have enough space to gain the momentum that it needed for the horses to run near it. On action, the train started moving. At the proper mark, when the train passed the horses and stunt wranglers, the horses took off after the train. The "gang" ( 6 riders on horses) caught up to the jump off location/ platform and simultaneously- the wrangler next to the jump off horse (Cracker) grabbed the right rein with his left hand in order to steady the horse, the stunt wrangler let go of the reins and leaped from the horse onto the platform of the moving train, grabbing on to handle bars on the outside of the train. The rest of "the gang" veered away from the train and slowed their horses to a stop.

In the same sequence when the main villain is sprung from the train, the men on horseback ride along the moving train. From inside the prison car, the villain opens the doors and jumps from the moving train onto a moving horse.  Production achieved this scene by rigging a human harness that the stunt actor wore. The actor's harness was attached to a pulley system mounted on the train and operated by the production crew.  This system could push the actor out of the train, lower and lift him off of the horse while the train was in motion.

In the scene where the men on horseback ride through the river at night, the bottom of the river was sandy and provided sturdy footing for the horses. A wrangler stood off-camera to make sure the horses rode safely.

When the men are ambushed in the canyon by villains shooting from the mountains, on action horse riders reared the horses and rode them off-camera. In that same sequence, when the brother is shot off his horse, there is a close-up of a squib (blood pouch) exploding on the actor. On action, the stuntman falls off his horse, and off-camera a wrangler is holding the horse to make sure he doesn’t run.

In the scene where the hawk flies in the air and lands on a rock, trainers attached a tether to the hawk’s ankles, who then whistled for the bird to fly to point B.

In the scene where the vultures nip at a dead body, the vultures were tied to perches with a safety line. Trainers were off-camera surveying the scene.

The dead horse lying on top of a Texas Ranger was fake.

In the scene where Silver walks over to the Lone Ranger’s grave with his hat in his mouth and drops it, trainers used hand signals off-camera to direct him.

In the scene where we see a scorpion crawling on a cement tablet, production created a tablet and the trainer place the scorpion on the wall and encouraged it to walk.

In the scene where we see a group of rabbits come out of a cave, the rabbits were in a contained area with fencing surrounding them. Trainers used clickers and food to encourage rabbits to perform particular behaviors like sitting up and hopping.

The steer head and the bird in the brothel were both fakes.

In the scene where Silver picks up a bottle with his mouth, appears to drink beer out of it and drops it, trainers placed a rubber beer bottle into the horse’s mouth and pulled on his rein to make it look as if he’s drinking it.

In the scene where we see the actress and her kids living on a riverfront with steers and horses in the background, trainers had a barge built to safely transport the animals from the mainland across the river to what appears to be an island of sorts.

In the scene where birds disperse from bushes, trainers hid behind bushes and gently tossed the birds from point A to point B.

In the scene where the Indians ride on horses surrounding the barn and shooting their guns in the air, the area was cordoned off by production with fencing. They used quarter load blanks, which were very light. After action, wranglers came in to hold reins and calm them down. The goats in the background were walked to the set by their trainers and tied to a wagon wheel.

In the scene where Silver jumps out of a burning barn and runs off in the distance, production achieved this image by capturing the horse jump from a small height with different camera angles. Production used wands, each of which was on fire, at seven points to make it looks as if the fire was surrounding the barn. They placed a smoke pot in front of a strong wind machine. Horse jumped from a small platform onto a tarmac that had mats and soft footing.

In the scene where Silver licks off the scorpions from Tonto and Lone Ranger’s faces, two fake heads were placed in the sand, and covered with treats. The horse was placed on his mark and on action bent down to eat the treats from the fake heads. Scorpions were added in post by CGI.

In the same scene, the Lone Ranger and Tonto are buried up to their necks and Silver pulls Tonto out of the ground by having him bite onto the reins and Silver backs up, pulling him out. This scene was accomplished by having the two actors buried in a special box with their heads sticking out. Trainers had the horse bend his head down, whereupon the actor bites onto the rein. The horse then backed up, projecting the image that he’s pulling the actor out of the ground.

In the scene where the Lone Ranger is riding a horse leading a man tied by his wrists, the horse was ridden at a walk by a stuntman with another stuntman on foot tied to the saddle with a rope.

The bird in the cage was a fake. Production provided us with documentation.

In the scene when the Indians on horseback ride down the hill attacking the soldiers, production set up a ski run where the action takes place. The action of the horses running down the ski run was carefully rehearsed a number of times. Wranglers waited at the bottom of the ski run, where they helped stop the horses. When one of the Indians gets shot and falls off of his horse, the horse was animatronic and the stuntman on the horse was attached to a harness, which was pulled by a trainer at a certain mark. In the following battle with the soldiers, anytime we see an actor being shot or shooting, blanks and squibs were used that were not harmful to the animals.

In the scene where a stable explodes and the horses escape from the explosion, trainers built fence posts outside the corral to keep them in place as they run from the stable. Production placed mortars under the ground which set off small explosions of dust. The mortars were never near the horses. The explosion took place after the horses were cleared from the set.

In the scene where the Lone Ranger and the horse ride across the rooftops, production constructed a set made to look like the flat roofs of town buildings. There was a ramp for the horse at each end. A stuntman rode the horse from point A to point B, jumping over small barriers along the way.

In the scene, where the Lone Ranger rides his horse on the train jumping from car to car, production built a set that looked like the top of a train. The trainer rode the horse up a ramp to the set, and rode on the set, jumping on a blue screen placed between the two cars. The horse was never riding on a moving train. Also the scene where we see the Lone Ranger jump from the rooftops to the train was done through CGI.

In the scene where the man pushes the woman off the train and she lands on the horse facing the Lone Ranger, riding face to face, production filmed the actors facing each other on the horse riding at a relatively slow pace.

When we see the bird fly onto a rock in the museum behind Tonto, trainers placed a tether on the bird’s ankle, the tether was held by a trainer who cued the bird to fly to the rock.

The bird flying over the circus was computer generated.

The rabbit eating the scorpion at the end of the film was also done through CGI.