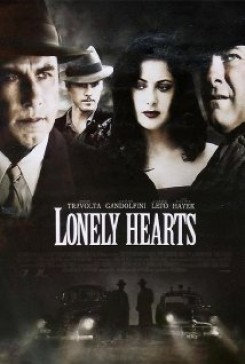 Based on the true story that captivated the nation in the 1940s, two homicide detectives hunt down Martha Beck (Hayek) and Raymond Fernandez (Leto), a homicidal couple known as the "Lonely Hearts Killers" who used personal ads to reel in their victims. After depleting these spinsters and widows of their savings, the deranged lovers viciously murdered their unsuspecting marks.

In one brief scene, a cockroach crawls on the ground and a man sitting at a desk drops a book on the floor to smash the bug. A real roach crawling on the ground was used to set up the scene, and then production substituted a fake roach for the smashing shot. The part of the family dog Skip was played by a yellow Labrador retriever named Stormy. A trainer used a combination of hand signals and verbal cues to get the dog to perform mild action such as sleeping on the bed or following an actor into or out of a room. Toward the end of the film, a bulldog sits beside a vegetable stand and is later seen on a long chain in a backyard, barking, as police arrive. A trainer put the dog on its mark and used hand signals to get the dog to sit still in the first scene and to bark ferociously in the second. For one scene, a trainer released 26 homing pigeons on cue. The birds were all banded and arrived home safely.